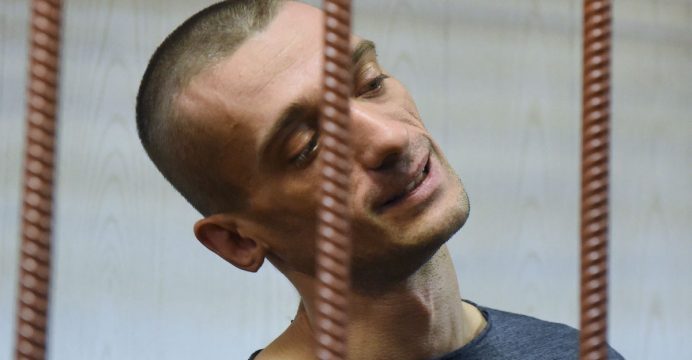 A Russian performance artist on Monday gave his Vaclav Havel Prize to a businessman who promised to fund a Russian group whose members have been convicted of killing policemen.

Peter Pavlensky was awarded the Havel Prize for Creative Dissent by the New York-based Human Rights Foundation in May, for a performance in which he set fire to the main entrance to the headquarters of Russia’s FSB security service, successor to the Soviet-era KGB, reports Reuters.

The prize, named after the late president of the Czech Republic, “celebrates those who, with bravery and ingenuity, unmask the lie of dictatorship by living in truth,” according to the foundation’s website. But the foundation later rescinded the prize and refused to pay out the accompanying $42,000, when the artist pledged to donate the money to attorneys of the group called Primorsky Partisans.

The group says it fights against police corruption and lawlessness. But some of its members have been convicted of killing several policemen, who they said were Russia’s real criminals.

Pavlensky said on Sunday he considered the Partizans worthy of the prize because they were opposing oppressive rule in Russia.

“I can give the award to people who I think deserve it, those who are struggling with police terror,” he told Reuters.

Radio Free Europe reported last month that a Vladivostok court acquitted five members of the Partisans who have been in jail since 2010, accused of killing police officers. But three of the five remain in jail for other crimes, including the murder of two other police officers.

Pavlensky’s earlier performances include sewing his lips together to protest against the jailing of anti-Kremlin punk band Pussy Riot in 2012. He also nailed his scrotum to Red Square in 2013, a gesture he described as a metaphor for the political apathy of Russian society.

Yevgeni Chichvarkin, a Russian millionaire currently living in a self-imposed exile in London, pledged to donate $42,000 for legal aid for the Partisans after Pavlensky handed him the prize, a statue of a woman holding a torch, at a brief ceremony on Prague’s Wenceslas Square on Monday.