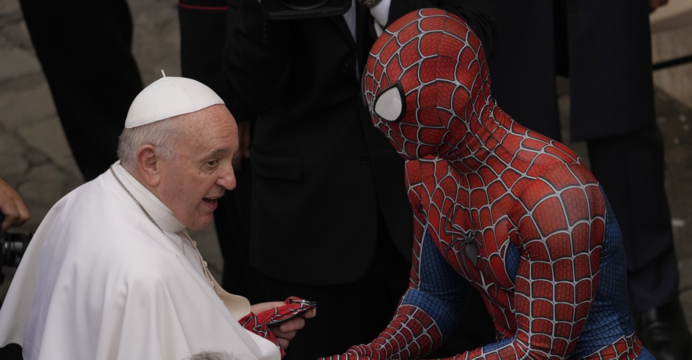 ‘Spiderman’ with Pope at Vatican

Pope Francis was spotted at the Vatican last Wednesday by a diverse participant among ordinary visitors. He is ‘Spiderman’.

He appeared at the Vatican’s San Damaso Courtyard in a red-and-black-and-blue outfit for Spiderman’s comic and movie character.

Reuters reported that a man was seen sitting quietly in a seat reserved for important people in the Vatican after wearing Spiderman’s clothes.

Mask and Spiderman Punishment The name of this person is Mattia Villardita (28). He is a resident of Italy.

Matthias got a seat in the ranks of essential people after the superhero costume mainly because of his work. She appeared in the hospital wearing superhero costumes to give pleasure to sick children. He later met with the Pope and handed him the Spiderman mask.