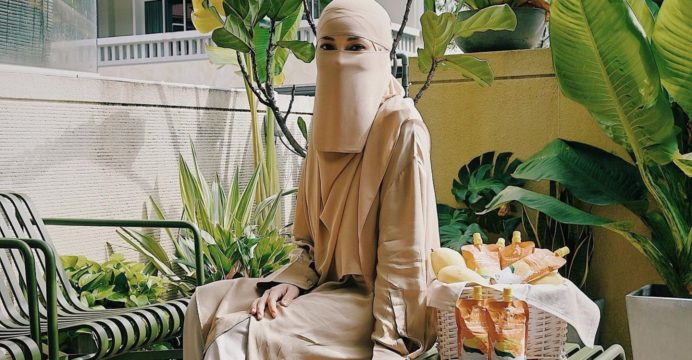 These photos include those showing her attending several fashion shows in Malaysia and abroad for the last few years, when she used to do modelling for various fashion brands.

She had reduced the number of photos displayed from 7,568 to 2,648 in Instagram. She is reported to be engaged to preacher PU Riz or Muhammad Haris Ismail.

The only photos of her left in Instagram were those which snapped while she was in Mecca for pilgrimage in 2019, as well as photos her and her family members and her business activities. Most of these photos are her photos, in which, she wore niqab, while the others consisted of messages related to religion.

Netizens appreciated her for removing the 4,000 photos, and addressed her as a courageous Muslim woman who really is interested to change for the better.

“May we all be blessed like Lofa, to do good in this world and the next,” said Atiqah.

In a recent Instagram video, Neelofa told Perempuan Tanpa Dosa actress Uyaina Arshad that she felt freer and happier since donning the niqab.

Neelofa started to wear niqab in the middle of October this year, and her mother Datin Noor Kartini was pleased by this decision.

On October 30th, Neelofa said in Instagram that she had decided to sacrifice beauty for the reward promised in the afterlife.

“Every woman wants to look pretty and that is the nature of most women. So it was not easy for me to come to the decision to wear the niqab. I know it would mean having to forgo what I love most, which is to indulge in beauty,” she said.