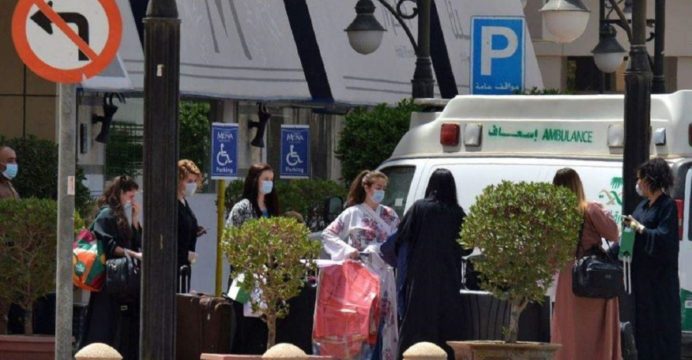 Saudi Arabia has quarantined thousands of people in hotels, some in luxury suites, to combat COVID-19, throwing a temporary lifeline to an industry struggling just months after tourist visas were launched.

Faced with nearly 4,500 novel coronavirus infections — the highest in the Gulf — the petro-state has halted air travel, locked down cities and imposed nationwide curfews in a crisis that has dealt a blow to the nascent tourism sector, reports BSS.

Offering a ray of hope, however, the government is splurging millions of dollars to quarantine thousands of overseas travellers and those exposed to infected people in otherwise empty hotels around the kingdom.

One four-star hotel in central Riyadh with 100-plus rooms was left with only five guests in mid-March when the Saudi government offered four million riyals ($1.06 million) a month for it to be used as a quarantine facility, an industry source told AFP.

One of its larger sister hotels was offered six million riyals, added the source, who requested the names of the properties be withheld because of the stigma attached to the disease.

“This is better than running an empty hotel,” the source said.

“The staff had been preparing for layoffs, up to 50 percent pay cuts or leave without pay.”

But things are looking up, for now. 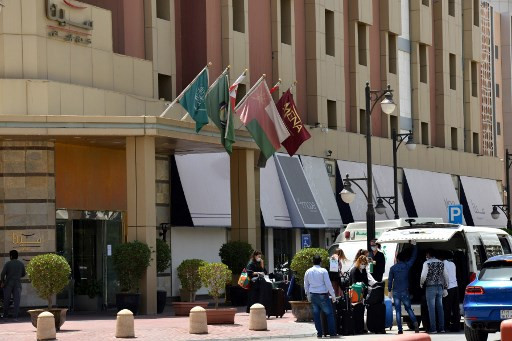 Mask-clad guests who were in quarantine depart the Mena Hotel in Riyadh on March 30, 2020. Saudi Arabia has quarantined thousands of people in hotels, some in luxury suites, to combat COVID-19, throwing a temporary lifeline to an industry struggling just months after tourist visas were launched

Such was the desperation from a slump in business that multiple hotel chains are chasing similar deals with the government, despite some reservations that being linked with COVID-19 could hurt their brand image in the long term, the source said.

Nearly 1,900 rooms in hotels and other tourism facilities in Riyadh had been reserved for quarantine cases, along with more than 2,800 in Mecca and another 1,900 in the kingdom’s eastern region, the tourism ministry said on its website at the end of March.

This week the ministry said 11,000 rooms around the kingdom had been prepared to quarantine Saudis stranded abroad who are expected to return to the country.

The government spending comes despite a precipitous fall in state revenue as oil prices plunge to multi-year lows.

The ministry has said it is committed to hosting Saudi returnees, including in the “most prestigious hotels”.

Saudi football coach Abdulhakeem al-Tuwaijri told AFP his free-of-charge quarantine experience in Mecca after he returned with his team from a football training camp in Barcelona “beats any five-star hotel in Europe”.

Despite the pressures of round-the-clock confinement, Tuwaijri — who was put up in a plush suite — said it felt like “going on a vacation”.

A group of South Asian transit passengers at one Riyadh hotel took advantage of the all-expenses-paid quarantine to order “too much” room service, the industry source said.

But the quarantine system has also seen complaints of misplaced luggage and food delays from some passengers who were hauled by authorities from Saudi airports to hotels without any prior warning.

Saudi nationalists have attacked such critics online as being ungrateful.

“Saudi Arabia is not a champion of human rights, but it is keen to show it is pampering people quarantined in hotels,” Quentin de Pimodan of the Research Institute for European and American Studies told AFP.

“With this, it is hitting two birds with one stone — it is also trying to save hotels and its nascent tourism industry.”

Saudi Arabia’s hotel industry faces a sharp downturn after the kingdom launched tourist visas last September with much fanfare and ambitions to welcome 100 million visitors by 2030.

The kingdom has spent billions in an attempt to build a tourism industry from scratch, one of the main planks of Crown Prince Mohammed bin Salman’s drive to wean the economy off its decades-long dependence on oil revenues.

The announcement led to a rush to build new hotels, with officials at the time estimating 500,000 rooms will be required nationwide over the coming decade to fill the current infrastructure gap.

More than 138 hotel projects with 54,143 rooms were due to be unveiled in the kingdom in 2019-20, according to industry projections.

But the projects are bound to suffer delays and funding setbacks amid COVID-19 shutdowns, said the manager of a five-star Riyadh hotel that declined government offers to be used to quarantine people.

He said such deals offered a “short-term cash benefit” at a time when his hotel was forced to slash staff salaries and force many to go on unpaid leave.

But, he added, the move could affect the hotels’ brands and guests will be afraid to return to a “hotel associated with the virus”.