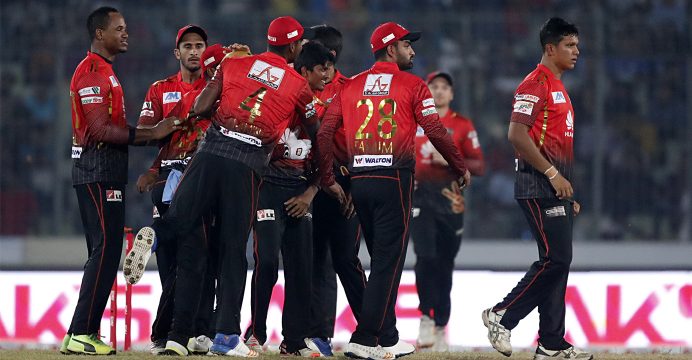 Comilla Victorians continued their winning streak in the Aaks Bangladesh Premier League T20 beating star-studded Rangpur Riders by 14 runs in the 20th match of the tournament held on Saturday at Sher-e-Bangla National Cricket Stadium at Mirpur.

With the day’s win, Comilla moved to the second position in the points table with eight points from five matches while bottom-ranked Rangpour Riders remained at their previous credit of two points playing four outings.

Chasing Comilla’s modest 153 runs, Rangpur Riders stumbled as they lost their West Indies star batsman Chris Gayle (17) and Brendon McCullum (13) early and eventually they were restricted at 139 for 7 in 20 overs.

English batsman Ravi Bopara and Mohammad Mithun aroused some hope for Rangpur as they contributed 67-runs for the fifth wicket stand before Al Amin struck again on Rangpur innings sending back to Mithun.

The wicket keeper batsman Mithun played a responsible knock of 26-ball of 31 runs with the help of one over boundary and one boundary.

Bopara kept his wicket intact in the other end and tried in the last but with a patient unbeaten run-a-ball 48 runs knock but it merely helped to reduce the defeat margin. The right handed English batsman hit five boundaries.

Mehedi Hasan and Rashid Khan shared two wickets each for Comilla giving away 15 and 19 runs respectively.

Mehedi Hasan of Comilla was named the player of the match.

Earlier Imrul Kayes and Marlon Samuels’s responsible knocks helped Comilla Victorians a score a decent total of 153 for 6 from tgheir allotted 20 overs, after they were forced to bat first by Rangpur Riders. Comilla suffered early batting jolt as they lost both their openers Tamim Iqbal (21) and Liton Das (11) early.

Pacer Mashrafe Mortaza then sent back to Jos Butter for 1, leaving Comilla in a deep trouble.

Then Imrul Kayes and West Indies batsman Samuels took the responsibility to repair the early damage as the duo paired an useful 45 runs for the fourth wicket stand before Kayes was caught behind by wicket keeper Mithun off Thisara Perera delivery.

Kayes top scored with 32-ball off 47 runs with the help of four boundaries and two over boundaries played while Samuels supported him with a priceless 34-ball off 41 that studded four fours and a six before he perished to Perera.

Later Mohammad Saifuddin’s unbeaten 11-ball off 16 helped Comilla to post a respectable total. He smacked one over boundary and a boundary. Mashrafe Bin Mortaza and Thisara Perera shared two wickets each giving away 22 and 26 runs respectively.