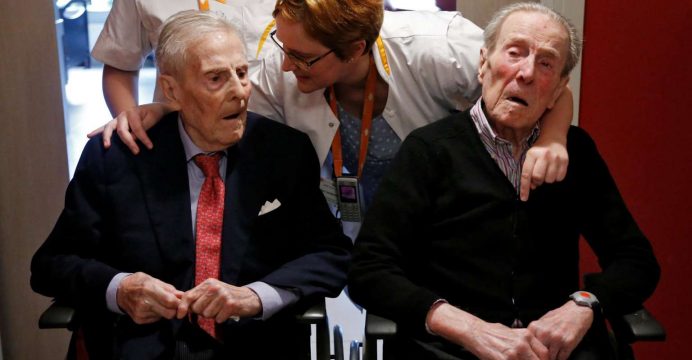 Belgian twins celebrate 103 years living side by side

The world’s oldest male twins, Pieter and Paulus Langerock of Belgium, turned 103 on Friday, raising a glass of wine to more than a century of living side by side.

The brothers, neither of whom ever married, have lived together for most of their lives. To this day, they barely leave each other’s side, sharing a room at their nursing home just outside the Belgian town of Ghent.

While they sometimes regret not having had any children or grandchildren, they say they are each other’s best friends and celebrated their birthday with a glass of French red wine,reports Reuters.

After their long careers as court magistrates in the middle of the 20th century, the elegantly-dressed 103-year-olds prefer speaking French and being addressed as “Pierre and Paul”.

They have another two years to go to break the record of U.S. brothers Glen and Dale Moyer, both of whom reached 105.