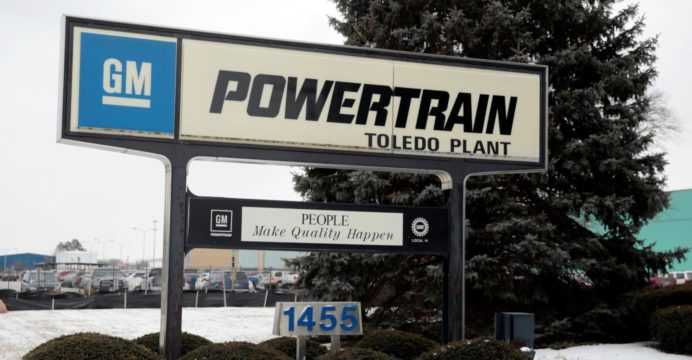 An auto trade group noted the bill sets aside “more than $15.5 billion in incentives and grants to ensure the United States is building automotive supply chains and a globally competitive battery manufacturing platform.”

“Once the plant is converted, it will produce GM’s family of EV drive units, which convert electric power from the battery pack to mechanical motion at the wheels,” GM said, adding the plant will produce transmission products while building drive units simultaneously during GM’s EV transition.

The Toledo facility currently employs approximately 1,500 people. Many autoworkers have expressed concerns about the shift to EVs and if it would impact current auto employment.

GM executive vice president Gerald Johnson said GM is looking for ways to increase electric vehicle capacity beyond its current goal of being able to build 1 million EVs in North America by 2025.

But hitting that target “would be outstanding. To do better would be astronomical,” Johnson said.

GM said last year it would increase its EV and autonomous vehicle investments from 2020 through 2025 to $35 billion, a 75% increase as it vows to stop selling gas-powered vehicles by 2035.

GM and LG Energy Solution said last month they are considering a site in Indiana for a fourth U.S. battery cell manufacturing plant for the companies’ Ultium joint venture expected to cost about $2.4 billion.

Last week, GM said it would invest $491 million at its Marion, Indiana metal stamping operations to prepare the facility to produce a variety of steel and aluminum stamped parts for future products, including electric vehicles.