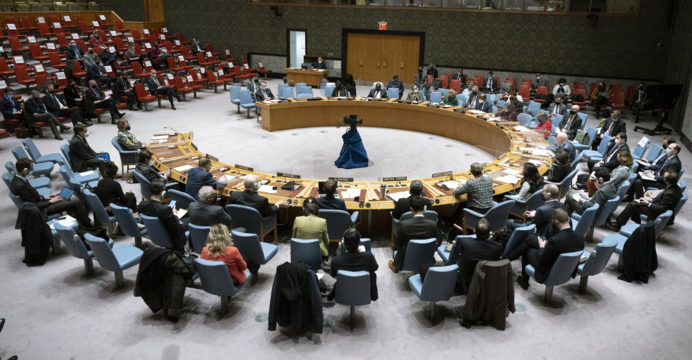 Here’s a rundown of what’s been said so far:

The leaders of France, Germany and the United States condemned Putin’s move as a “clear breach” of the Minsk peace agreements.

French President Emmanuel Macron, German Chancellor Olaf Scholz and US President Joe Biden agreed that “this step will not go unanswered”, the German chancellery said in a statement published following their conversation.

US Secretary of State Antony Blinken tweeted that Putin’s decision required “a swift and firm response, and we will take appropriate steps in coordination with partners”.

The United States announced financial sanctions against the rebel territories freshly recognized by Russia in eastern Ukraine and warned that more were ready if necessary.

UN chief Antonio Guterres said Russia’s decision amounted to “a violation of the territorial integrity and sovereignty of Ukraine and inconsistent with the principles of the Charter of the United Nations”.

“He is demanding an emergency meeting of the UN Security Council as well as the adoption of targeted European sanctions,” said a statement from his office.

UK Prime Minister Boris Johnson denounced Putin’s decision as “a flagrant violation of the sovereignty and integrity of the Ukraine”.

A “very robust package of sanctions” would be triggered “with the first toecap of a Russian incursion or Russian invasion”, he added.

German Foreign Minister Annalena Baerbock said that Moscow was breaking the Minsk peace agreements that it signed in 2014.

“With its decision, Russia is breaking all its promises to the world community,” she said.

NATO chief Jens Stoltenberg said Putin’s decision “further undermines Ukraine’s sovereignty and territorial integrity, erodes efforts towards a resolution of the conflict, and violates the Minsk Agreements, to which Russia is a party.

“Moscow continues to fuel the conflict in eastern Ukraine by providing financial and military support to the separatists. It is also trying to stage a pretext to invade Ukraine once again,” he added.

Condemning Putin’s move as “a blatant violation of international law”, they added: “The EU and its partners will react with unity, firmness and with determination in solidarity with Ukraine.”

Serbian President Aleksandar Vucic said there are fears that the Ukraine crisis “could spread in other parts of Europe and the world, especially on the Western Balkans”.

Romania’s foreign ministry tells all its nationals in Ukraine to “leave the country immediately!”