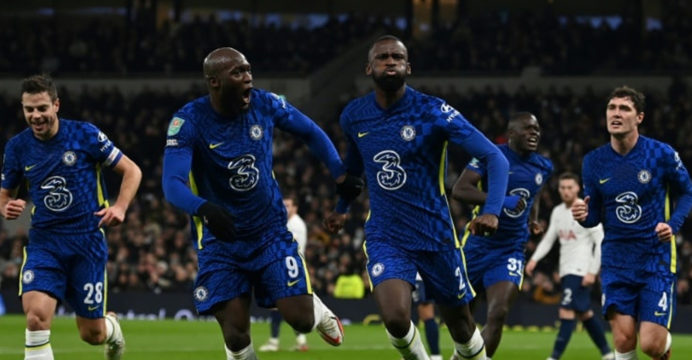 Chelsea reached the League Cup final despite “playing with fire,” according to Thomas Tuchel, after Antonio Rudiger’s goal and three VAR rulings helped the Blues win 1-0 against Tottenham on Wednesday.

Chelsea pressed home the lead they had acquired with a 2-0 win in the semi-final first leg last week thanks to Rudiger’s first-half header.

Tuchel’s team also had VAR official Mike Dean on their side after Andre Marriner gave Tottenham two penalties, both of which were overturned by replays, and Harry Kane had a goal disallowed for offside.

Chelsea, 3-0 aggregate winners, will play Liverpool or Arsenal in the final at Wembley on February 27.

Liverpool host the coronavirus-delayed first leg of their semi-final against the Gunners on Thursday.

“We started good. We had big chances and controlled the match, but I had the feeling we played with fire,” Tuchel said.

“We allowed chances from sloppy mistakes and were lucky. We almost gave a penalty away for no reason, for a bit of over-confidence.

“We needed luck to not give away another penalty, to have an offside VAR decision.”

Tuchel is the first manager in Chelsea’s history to lead the club to the Champions League, FA Cup and League Cup finals, a feat he has achieved just 350 days after his first game in charge in January 2020.