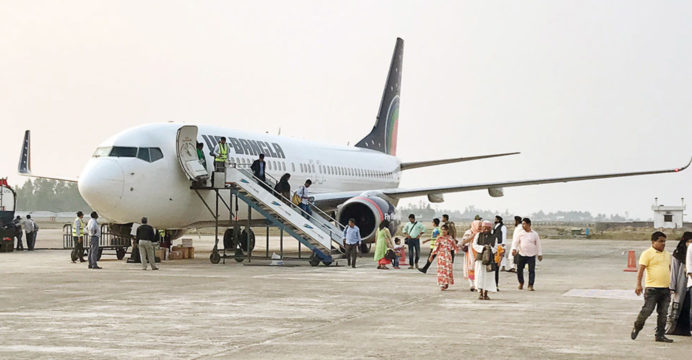 Two more Boeing 737-800 planes have been added to the US-Bangla airlines fleet, bringing the total number of planes in the fleet to 16.

The country’s largest private airline, Us-Bangla Airlines, will also begin flights from Dhaka to Colombo, Sharjah, and Delhi with these two freshly entered Boeing 737-800 aircraft, each with 189 economy class seats.

The two planes arrived at Hazrat Shahjalal International Airport (HSIA) around 11:00 p.m. and 11:30 p.m., respectively, from Jordan, according to a press release issued today.

In June of next year, the airlines aim to add Airbus 330-200/300 aircraft to fly flights from Dhaka to Jeddah, Riyadh, and Medina.

Currently, the airline offers international flights to Kolkata, Chennai, Male, Muscat, Doha, Dubai, Kuala Lumpur, Singapore, and Guangzhou, as well as domestic flights to all of the country’s major cities.

At the airport, there were also senior officials from the Bangladesh Civil Aviation Authority and US-Bangla Airlines.