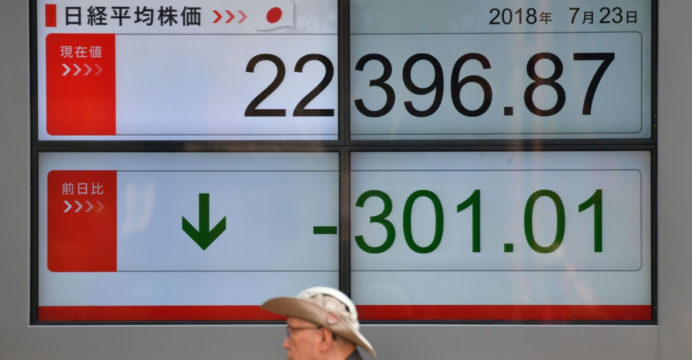 Tokyo stocks opened lower on Thursday, extending falls on Wall Street as investors awaited a monetary policy decision from the Bank of Japan later in the day.

Wall Street’s record rally petered out and stocks elsewhere slid as the US ban of China Telecom along with Germany’s growth downgrade weighed on sentiment.

In Tokyo, investors were “focusing on the result of the Bank of Japan’s monetary policy meeting”, even though the central bank is widely expected to stand pat on its massive easing programme, said senior market analyst Toshiyuki Kanayama of Monex.

Investors were also looking ahead to Sunday’s general elections in Japan, analysts added.

Local media reported that the Liberal Democratic Party’s ruling coalition is expected to win a comfortable majority but will likely lose some seats.

Hitachi plunged 4.15 percent at 6,498 yen after it trimmed its full-year operating profit forecast, while Sony was down 1.37 percent at 12,925 yen ahead of its earnings report due after market close.

Shinsei Bank was off 0.52 percent at 1,902 yen after a report said it plans to offer 0.8 shares for each share held by shareholders, except for SBI Holdings, in an attempt to protect it against the brokerage’s takeover bid.