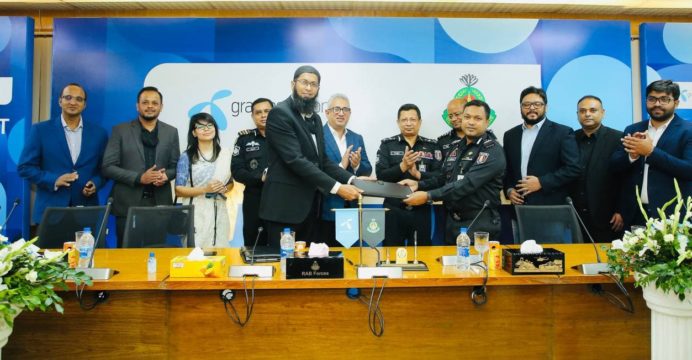 Corporate agreement between Grameenphone and RAB for telecommunication and ICT facilitation

The partnership between mobile operator Grameenphone and Rapid Action Battalion Forces (RAB) has been reinforced to help meet RAB’s a telecommunication and ICT requirements. To bring the mobile network of RAB Forces under the same platform, a corporate agreement has been signed between both the parties at the RAB Forces’ Headquarters on October 18, 2021. Under this agreement, Grameenphone will provide tailormade voice, data and ICT solutions to RAB for the next five years, strengthening the collaboration to achieve more remarkable milestones ahead.

Chowdhury Abdullah Al-Mamun, Director General (DG) of RAB Forces, expressed his continued reliability on Grameenphone, saying – “RAB has been relying on Grameenphone as a trusted connectivity partner over the years for its countrywide coverage, innovative services and excellence. As we renew this partnership, I look forward to even better services from Grameenphone in the coming days.”

Aiming to nourish the confidence in the relationship further, Yasir Azman, CEO of Grameenphone, said, “We are humbled to provide our telecommunication and ICT services to RAB – which needs connectivity excellence to deliver on their daily operations in every corner of the country as & when needed. This agreement renewal is a testimony of keeping promises to them which drives us to innovate and build advanced capabilities in our network through modernization.”