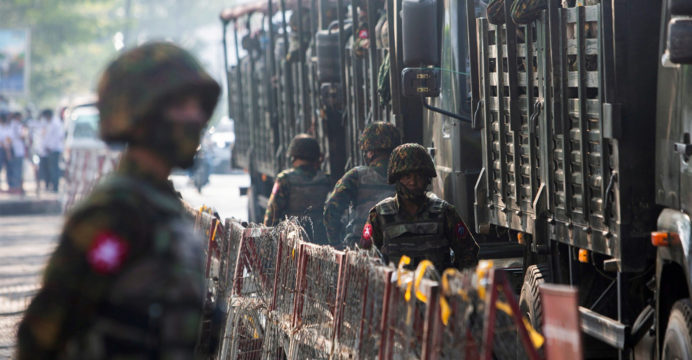 The military and media said that anti-junta dissidents in Myanmar carried out a bomb attack on security personnel in Yangon, with several people dead in the ensuing gunfire.

Since the military deposed Aung San Suu Kyi’s elected administration in February, the Southeast Asian country has been in chaos, provoking large pro-democracy protests and a brutal military crackdown.

Although the majority of conflicts have been recorded in rural regions, many townships around Myanmar have created so-called “people defense forces” to fight back against the junta.

The junta stated in a statement on Saturday that security troops were targeted with a homemade device while moving through Khayan, a neighborhood of Myanmar’s commercial capital Yangon, on Friday.

“Both groups fired back and forth, injuring a member of the security forces,” according to the statement, which also stated that rifles and ammunition were collected as a result of the clash.

“A few terrorists were… (killed), and one was injured.”

At least two dissidents were killed, according to local media, and one was captured.

A “National Unity Government” made up primarily of MPs from Suu Kyi’s deposed party called for a “people’s defensive war” and urged citizens to attack junta assets earlier this month.

Throughout Myanmar, communications towers belonging to the military-owned Mytel firm have been targeted.