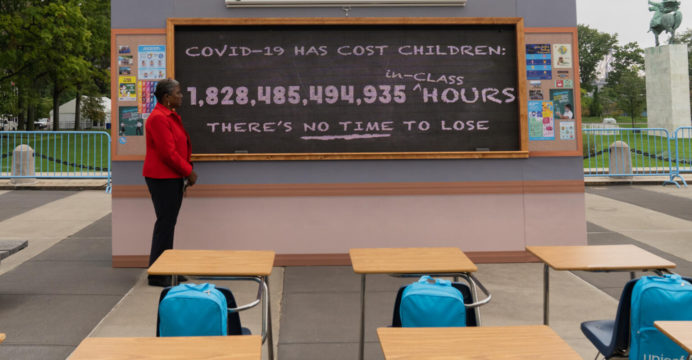 Schoolchildren around the world have lost an estimated 1.8 trillion hours – and counting – of in-person learning since the onset of the COVID-19 pandemic and subsequent lockdowns. As a result, young learners have been cut off from their education and the other vital benefits schools provide.

To call attention to this education crisis, UNICEF today unveiled ‘No Time to Lose’ at United Nations Headquarters in New York. The centrepiece of the installation is a clock, modelled to look like the blackboard of an empty classroom, situated at the UN Visitors’ Plaza in front of the General Assembly Building. The clock is a real-time counter, displaying the growing cumulative number of in-person learning hours every schoolchild in the world has lost and continues to lose since the pandemic’s onset. The empty classroom consists of 18 desks, one for every month of the pandemic-caused education disruptions.

The installation is being created ahead of the opening of the General Debate of the 76th session of the United Nations General Assembly (UNGA), a period when some leaders will take the opportunity to return to United Nations headquarters in person for the first time since the onset of the pandemic.

“Next week, the United Nations will open its doors to delegations from around the world. But in many countries, the doors of schools will remain closed to children and young people,” said United Nations Secretary-General António Guterres. “We are short-changing an entire generation whose minds and futures hang in the balance. We must prioritize the reopening of schools and support those who have lost out during the pandemic. There is no time to lose.”

This year, the General Debate and associated annual meetings will take place in a hybrid format, with many events taking place virtually. The installation, open to delegations which will have elected to attend General Assembly meetings in-person, is a stark reminder that millions of schoolchildren remain locked out of their schools and a call for leaders to act urgently on this education crisis.

The installation will be up from 17 September to 27 September with the conclusion of UNGA.

Globally, around 131 million schoolchildren in 11 countries have missed three-quarters of their in-person learning from March 2020 to September 2021. Among them, 59 per cent – or nearly 77 million – have missed almost all in-person instruction time. Around 27 per cent of countries continue to have schools fully or partially closed. Additionally, according to UNESCO’s latest data, more than 870 million students at all levels are currently facing disruptions to their education.

UNICEF urges governments, local authorities, and school administrations to reopen schools as soon as possible and take all possible steps to mitigate against transmission of the virus in schools.

Additionally, UNESCO, UNICEF, UNHCR, WFP and the World Bank previously issued the Framework for School Reopening to provide practical and flexible advice for national and local governments and aid their efforts to return students to in-person learning.