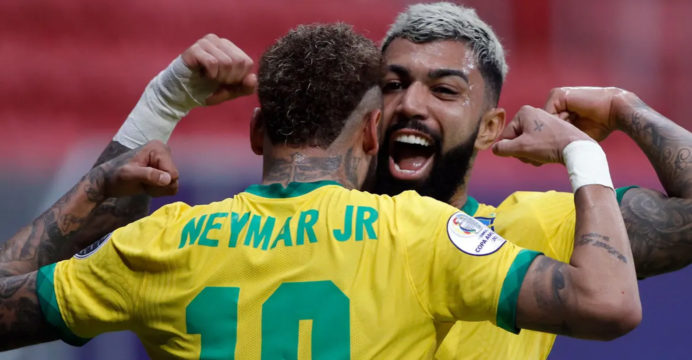 Brazil started with a win in the Copa

Hosts Brazil has won their first match in Group B of Copa America. Selesaora faces Venezuela on Monday morning at Bangladesh time. Brazil won by 3-0 diference, thanks to goals from Marquinhos, Neymar and Gabriel Barbosa.

Brazil went ahead in the 23rd minute of the match at home to Brasilia. Marquinhos got Neymar’s blown ball from the corner into the box. The defender of this PSG did not make a mistake in catching that ball in the net.

Two minutes later, the goal was scored again, but Rickallison’s goal was disallowed due to offside. Neymar also had a chance to score before going to the break. But he could not use it. His shot went through the net.

Neymar got another chance at the beginning of the second half. He missed again. Daniloke d in the 64th minute Brazil get a penalty if Venezuelan Johan Kumana fouls on the box line. Neymar doubled the lead with a cold header from the spot-kick.

Gabriel Barbosa finally nailed the last nail in the Venezuelan coffin. In the 69th minute, Barbosa sent the ball from Neymar’s cross to the net. This ensured Brazil’s 3-0 victory.

Brazil will play the second match of the group stage on Thursday night. Today their opponent is Peru. And Venezuela will play against Colombia.