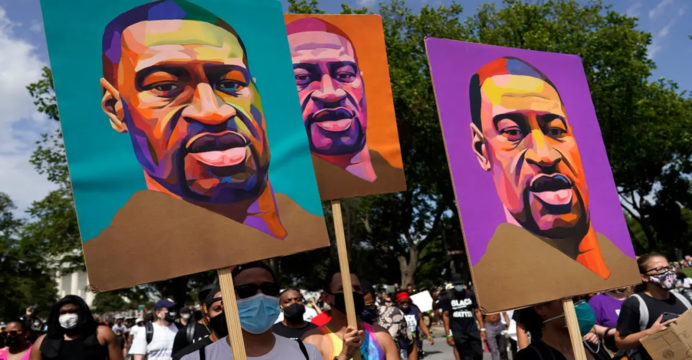 The family of George Floyd appealed Tuesday for sweeping police reform on the anniversary of the African American man’s murder by a white officer, as they met President Joe Biden at the White House, reports BSS.

The president and Kamala Harris, America’s first female and first Black vice president, hosted several of Floyd’s relatives in the Oval Office after the family spoke to top lawmakers hoping for progress on reform.

“The Floyd family has shown extraordinary courage,” Biden said after their meeting — declaring himself “hopeful” that a deal could be struck after the Memorial Day holiday this weekend.

The legislation being considered to increase police accountability would be named after Floyd, who suffocated after being pinned down under the knee of Minneapolis officer Derek Chauvin on May 25, 2020.

Floyd’s mother, siblings and his daughter Gianna, along with family lawyers, had earlier gathered at the US Capitol with House Speaker Nancy Pelosi and other Democratic members of Congress.

While the adults discussed their hopes for police reform, it was seven-year-old Gianna — hugging her mother Roxie Washington — who eloquently addressed the legacy of her late father, saying he would “change the world.”

The family later visited Black Lives Matter Plaza close to the White House, which became a focal point for demonstrations in the weeks after Floyd’s death.