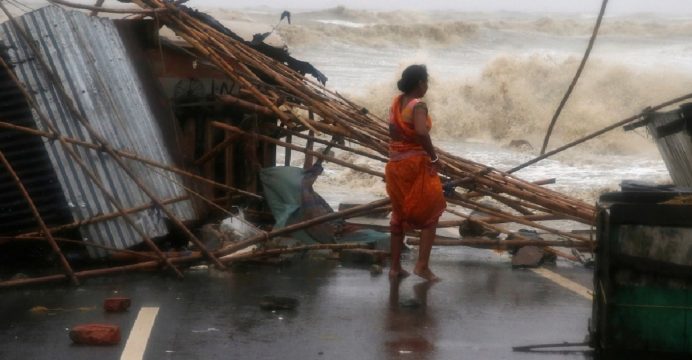 More than a million people in India have been evacuated as a powerful cyclone has started making landfall on its eastern coast on Wednesday.

Cyclone Yaas, which intensified into a “very severe cyclonic storm”, hit the state of Orissa, also known as Odisha, and will take two hours to cross over.

This is the second cyclone to hit the country in a week, after Cyclone Tauktae killed more than 150 people. It comes as India is already struggling to deal with its Covid-19 outbreak, reports BBC.

Yaas lashed coastal areas with ferocious wind and rain as it made landfall, damaging buildings.

India’s meteorological department said low-lying areas near the coast have been inundated due to the rain and tidal surges accompanying the cyclone.

Many coastal villages in West Bengal state, neighbouring Orissa, were flooded by sea water. Army teams have been deployed to rescue 32 people stranded in a coastal district because of a storm surge.

Weather department officials say they expect wind speeds of 140km/h (87mph) gusting to 155km/h (96mph) as the cyclone completes the process of landfall over the next few hours.

The storm is then likely to weaken gradually.

District officials in Orissa and West Bengal states say there are millions of people living in vulnerable coastal areas.

Nearly 1,200 rescue shelters have been sanitised in line with Covid-19 safety norms, and health teams have been deployed there – but there are worries that it will be difficult to maintain social distancing protocols as more than a million are evacuated to shelters, according to news agency ANI.

The Indian Coast Guard said on Twitter that all 265 fishing boats reported to be at sea in the Bay of Bengal have safely returned to harbour. Disaster response teams, aircraft and ships are on standby as the storm bears down on the east coast.

The Indian army has deployed 17 rescue and relief teams consisting of specialised personnel with equipment and inflatable boats.

The states of Andhra Pradesh, Jharkhand and Tamil Nadu states on the east coast are also likely to be affected, with more than 50 rescue teams having been sent to these states.

Airports in Bhubaneswar in Orissa, and Kolkata in West Bengal have suspended all operations until Wednesday evening.

Cyclone Yaas comes at a time when India has been battling a deadly second wave of Covid-19 infections, and healthcare systems are already overworked.

Crematoriums, graveyards and hospitals were already functioning at full capacity with the rapid increase in cases and deaths, though there is a relative fall in fresh infections now, according to official data.