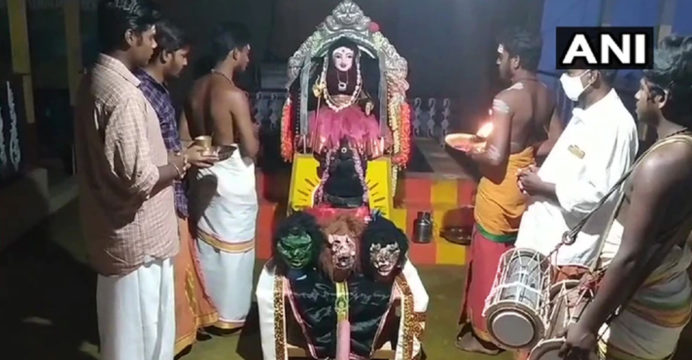 India is going through the worst time since the start of the Corona epidemic. The daily death toll from corona in the country is over four thousand, and the number of daily infections is around two and a half million. In this situation, the worship of ‘Corona Devi’ has started to survive from the hands of Corona.

The whole temple has been built. Goddess Corona is being worshiped with music with special prayers. The incident took place in Coimbatore in the southern Indian state of Tamil Nadu. There is a statue of ‘Corona Devi’ in the Kamatchipuri Adhinam temple.

One of the temple servants said, ‘Only the goddess Corona can control this deadly disease. A special 48-day prayer has also been organized at the temple to please the goddess. However, it will not be opened to the public in accordance with the lockdown.

Incidentally, the plague spread to Tamil Nadu in the early twentieth century. Plague Mariamman Temple was established and prayers were offered there at that time.

The locals are also relying on ‘Corona Devi’. And so Yajna will be organized in this temple.