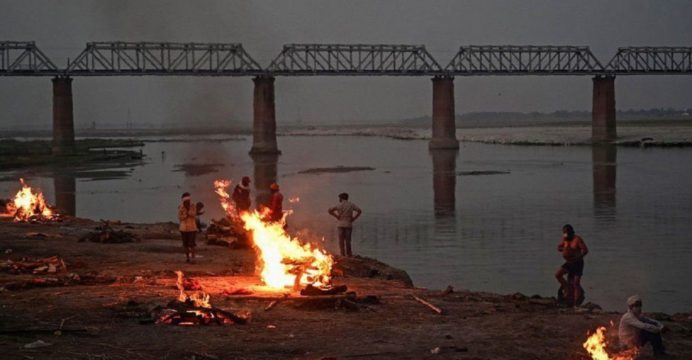 India’s holiest river, the Ganges, has been swollen with bodies in recent days.

Hundreds of corpses have been found floating in the river or buried in the sand of its banks. Those who live close to where they have washed up, in the northern state of Uttar Pradesh, fear they are Covid-19 victims, reports BBC.

India has been overwhelmed by a devastating second wave of the pandemic in recent weeks. It has recorded more than 25 million cases and 275,000 deaths, but experts say the real death toll is several times higher.

The bodies on the river banks, taken together with funeral pyres burning round-the-clock and cremation grounds running out of space, tell the story of a death toll unseen and unacknowledged in official data.

The BBC spoke to local reporters, officials, and eyewitnesses in some of the worst affected districts of Uttar Pradesh and found that behind the story of the floating bodies lies traditional beliefs, poverty, and a pandemic killing people at lightning speed.

The horror in Uttar Pradesh first came to light on 10 May when 71 corpses washed up on the river bank in Bihar’s Chausa village, near the state border.

Neeraj Kumar Singh, superintendent of police for Buxar, where Chausa is located, told the BBC that autopsies were carried out on the mostly decomposed bodies, DNA samples were taken, and the bodies buried in pits near the river bank.

Officials said some of the remains could be body parts which had found their way into the Ganges after routine cremations on the banks, but they suspected the corpses had been dumped in the river. The police installed a net across the water to catch any more.

A day later, six miles (10km) from Chausa, dozens of heavily decomposed bodies were found strewn on the river bank in Gahmar village in Uttar Pradesh’s Ghazipur district, with feral dogs and crows feasting on them.

Local people said the bodies had been washing up on embankments for several days, but authorities had ignored their complaints about the stench until the news about the corpses found downstream in Bihar hit the headlines.

Dozens of bloated and decomposed bodies floating in the river also greeted villagers in the neighbouring Ballia district when they went for their morning dip in India’s most sacred river. The Hindustan newspaper reported that police retrieved 62 corpses.

In Kannauj, Kanpur, Unnao, and Prayagraj, the river bed is dotted with shallow graves. Videos sent to the BBC from the Mehndi ghat embankment in Kannauj show scores of human-sized mounds. Many look just like a bump in the river bed, but each one hides a body. At the nearby Mahadevi ghat, at least 50 bodies were found.