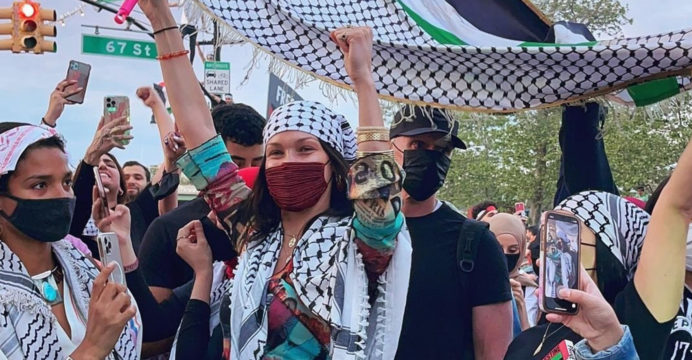 Model Bella Hadid on the streets of New York for Palestine

Palestinian-American Model Bella Hadid has expressed solidarity with the Palestinians by condemning the Israeli violence in Gaza. Thousands of people took to the streets of New York on Sunday (May 18th) to protest the Israeli attack on Gaza. Bella Hadid took part in the protest.

The protesters held a rally in Brooklyn, New York City.

“The way my heart feels.. To be around this many beautiful, smart, respectful, loving, kind, and generous Palestinians all in one place… it feels whole! We are a rare breed!!” Bella wrote in a post on her Instagram account of the protests.

“Palestine is independent, always independent,” she added. Bella Hadid also posted a picture of joining the protest below the post.

Incidentally, clashes erupted between the two sides since last Monday (May 10). The death toll from Israeli fighting in Gaza has risen to 192, including 57 children. More than 1,200 people were injured.

On the other hand, Hamas fired about 3,000 rockets in response to the Israeli attack. It is reported that 10 people have been killed in Israel so far.

This is the deadliest battle between Israel and Gaza in the last few years since 2014.