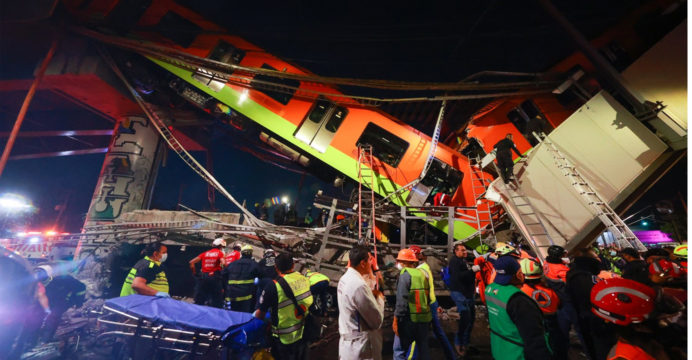 23 people killed after a metro rail overpass collapse in Mexico

At least 23 people have been killed after a metro train overturned in Mexico. At least 60 others were injured in the incident. The BBC reports that the crash happened on Monday night (May 3) local time in the metro 12 line of the capital Mexico City.

Upon receiving the news, the members of the security forces rushed to the spot. In addition to several bodies, many people were rescued injured. When they were later sent to the hospital for treatment, authorities said the condition of several people was critical.

Attempts are being made to stabilize the train carriages with cranes. Rescue operations are being carried out in bogies using big ladders. Emergency crews say some people may still be trapped under the collapsed bridge. The rescue operation continues. They also expressed concern that the number of casualties may increase.

City Mayor Claudia Shinbaum rushed to the scene shortly after the crash. He said an investigation has been launched to find out the cause of the incident. At the same time, he said that action will be taken against those responsible.

Mexico City’s metro is one of the busiest in the world, carrying about 1.7 billion passengers a year. This line number 12 was launched in 2012.