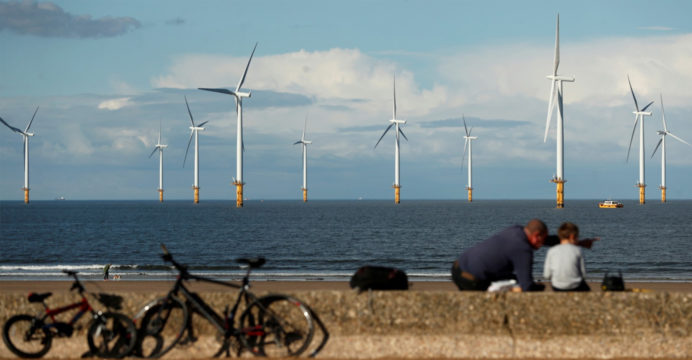 Denmark has approved plans to build an artificial island in the North Sea that could generate wind power for at least three million households, the government said Friday.

The Danish parliament adopted in June a political environmental framework aimed at reducing the country’s CO2 emissions by 70 percent by 2030, which included plans for the world’s first “energy hubs” on the island of Bornholm in the Baltic Sea and in the North Sea.

On Thursday, parliament went further by approving a plan to place the North Sea hub on an artificial island, with a wind power farm that will initially supply three gigawatts (GW) of electricity.

That could later be scaled up to 10 GW — enough for 10 million households — according to the Danish Ministry of Climate, Energy, and Utilities, much more than needed for Denmark’s population of 5.8 million.

“Clearly this is too much for Denmark alone and this also why we see this as a part of a bigger European project,” Climate Minister Dan Jorgensen told AFP, adding the country wished to also export excess energy to the rest of Europe.

Plans also include the use of “electrolysis” to extract hydrogen for use in the production of renewable fuels for things like maritime transport.

The island, “the largest construction project in the history of Denmark,” is to be majority-owned by the Danish government in partnership with private companies and is expected to cost around 210 billion Danish kroner ($34 billion, 28 billion euros).

Rather than a traditional offshore windpower farm, the island will function as an “energy hub” allowing connections from other countries’ wind power farms and cables to efficiently distribute the incoming energy.

Its final size is yet to be decided but it is expected to cover between 120,000 to 460,000 square meters (about 1.3 to 5 million square feet), ministry spokesperson Emil Lee Madsen told AFP.