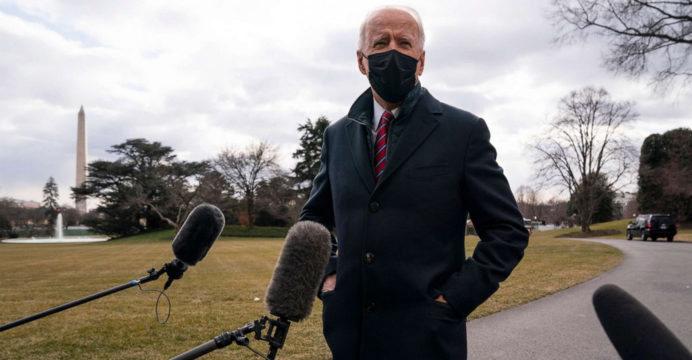 POTUS Joe Biden met Monday with a group of Republican senators who are pushing an alternative to his massive Covid-19 relief plan, but no agreement was reached, reports BSS.

Biden, who campaigned on restoring bipartisanship in Washington, wants to spend $1.9 trillion to revitalize the world’s largest economy after the pandemic caused waves of layoffs last year, but Republicans in Congress have said they won’t support such a large package.

On Sunday, a group of 10 Republicans detailed a measure costing $600 billion, and Biden responded with an invitation to the White House to discuss the idea.

But no agreement was at hand following the meeting, which Republican Senator Susan Collins described as “frank and very useful,” if not conclusive.

“I wouldn’t say that we came together on a package tonight. No one expected that in a two-hour meeting,” she told reporters.

For its part, the White House said its package “was carefully designed to meet the stakes of this moment, and any changes in it cannot leave the nation short of its pressing needs.”

An outline of the Republican proposal shows it excludes aid to state and local governments that Democrats say any package must-have. It also gives out stimulus checks of $1,000, less than the $1,400 Biden has proposed and tightens eligibility.

Democratic leaders responded to the proposal by announcing they were moving ahead with a maneuver in Congress to pass the president’s plan without Republican votes, while Biden took to Twitter to restate his case.

“We’re facing an economic crisis brought on by a public health crisis, and we need urgent action to combat both,” he said. “My American Rescue Plan will dig us out of the depths of these crises and put our nation on a path to build back better.”