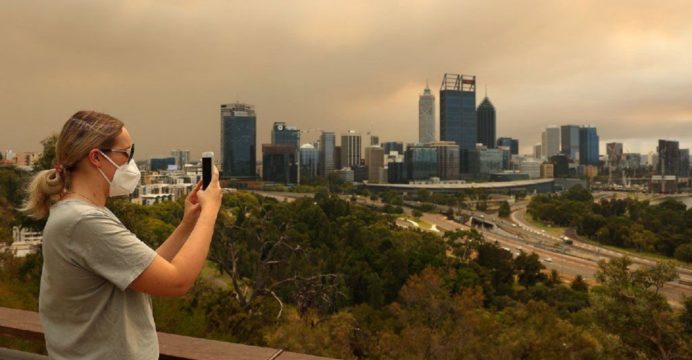 Bushfire raging outside Perth forced nearby residents to evacuate

A bushfire raging outside the Western Australian city of Perth has forced nearby residents to evacuate, as the city remains in a coronavirus lockdown.

The blaze, whipped up by strong winds, had doubled in size overnight to a 75km (46 miles) fire-front said officials. At least 30 homes are believed lost.

People have been told to flee to safety even if it means breaking lockdown, reports BBC.

However he urged the majority of the state capital’s residents – not in harm’s way of the fire – to remain in their homes to reduce the risk of the virus spreading.

By global standards, it is a very low risk as the city has reported just one local case. But the city of two million people entered a snap five-day lockdown on Sunday after that case – the first local infection in Western Australia in 10 months – was found.

“It is going to be an extremely challenging day for everyone involved. Please do everything you can to keep you and your family safe and look after each other,” Mr McGowan said.

WHAT IS HAPPENING WITH THE FIRE?

The Wooroloo fire, first reported at Monday midday, has grown into a fast-moving, erratic blaze which overnight raced through the hills and valleys fringing the city’s north-west.

Perth residents woke up on Tuesday to a blanket of smoke across the city. People reported ash falling from the sky in locations 50km away from the fire-front.

Fire authorities told people living in the north-west semi-rural suburbs – including Ellenbrook, Averley and Brigadoon – that they were in “immediate danger” and needed to evacuate or enact their bushfire survival plans.

Those in areas further afield have been told “the best option is to leave early and to leave now”.

About 250 firefighters – who are wearing masks and socially distancing – are battling the blaze but struggling in the hot and windy conditions, said Western Australia deputy fire commissioner Craig Waters.

Perth is enduring 35C (95F) temperatures and has experienced a run of hot days as well as extended dry conditions.

Mr Waters said historically, the area had not seen such large fires but “in the last few years, we have seen increased fire behaviour with rapid escalation overnight”.

“The changing climate… and moisture deficit in the soil is impacting how the fire behaves,” he said.

WHAT ABOUT THE VIRUS?

Deputy commissioner Waters told those quarantining in fire-threatened zones to “use common sense” and “do whatever they need to do to look after their own safety and the safety of their loved ones”.

“If they have to go to an evacuation centre, that is fine too,” he said.

In Swan, an affected fire region, authorities said dozens of locals had evacuated to other people’s homes “rather than go into a large crowd” at an evacuation centre.

Western Australia reported no new local infections on Tuesday beyond the initial case. But authorities said they had tracked down 151 close contacts of the infected person, a man in his 20s who worked as a hotel quarantine guard and also as a ride-share driver.

“We cannot be sure that the virus is not out there in the community, so by taking every extra precaution, we give ourselves the best chance of crushing this virus.”

Australia has recorded nearly 29,000 cases and 909 deaths since the pandemic began. For a populations of about 25 million – it is far fewer than many other countries.