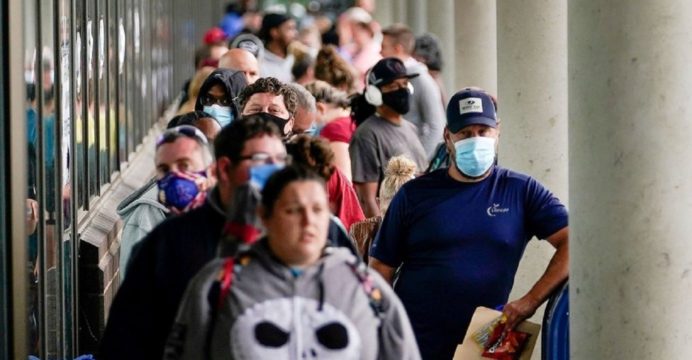 The US economy lost jobs last month for the first time since April as rising coronavirus cases took a toll.

Restaurants and bars led the payroll declines, as new restrictions in some places and cold weather sapped enthusiasm for outdoor dining.

The figures were the latest sign that the fragile economic recovery from the pandemic remains at risk.

The US has regained about half of the more than 20 million positions lost at the height of the lockdowns this spring.

But nearly 11 million people remain out of work, while more than seven million others would like a job, but have given up looking or are unavailable for other reasons, the Labor Department said.

The losses have hit low-wage and minority workers hardest, exacerbating divisions that pre-dated the pandemic, while job growth had been slowing even before last month’s decline.

The Labor Department said the US had gained more jobs in October and November than previously estimated, reducing some of the sting of Friday’s numbers.

But the report comes as other data shows consumer spending and confidence has weakened, even as vaccine approvals bring hope that life will start returning to normal.

“This is not what recovery looks like,” Elizabeth Pancotti, a senior adviser at Employ America, a liberal advocacy group focused on the labour market, said on Twitter.

Other economists said job gains in sectors apart from leisure and hospitality bode well for future growth, pointing to hiring by construction, retail and transportation and warehousing firms last month.

“While the fall… in December was far worse than the consensus estimate… it arguably overstates the weakness of the economy,” wrote Michael Pearce, senior US economist at Capital Economics.

“With employment in most other sectors rising strongly, the economy appears to be carrying more momentum into 2021 than we had thought.”

After months of wrangling, the US approved roughly $900bn more in emergency pandemic aid in December, extending unemployment benefits and sending more money to small businesses.

President-elect Joe Biden has said he hopes to do more when he enters office, with his party focused on aid for state and local governments, as well as new stimulus cheques.

“The latest round of Covid relief … is poised to help,” said Sarah House, senior economist at Wells Fargo, of December’s measure. “Nevertheless, the next few months are likely to be remain bleak in the jobs market as the pandemic continues to rage.”

This article has been posted by a News Hour Correspondent. For queries, please contact through [email protected].media
No Comments