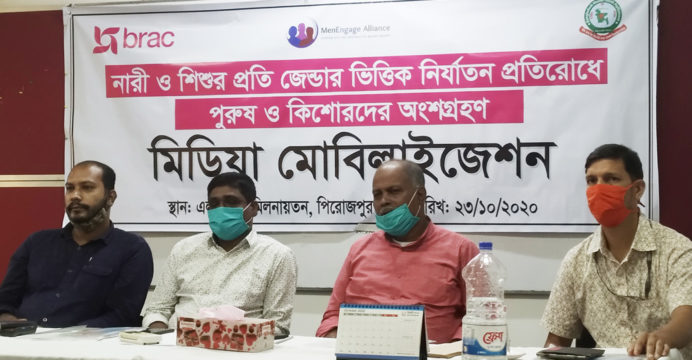 On Saturday afternoon, under the BRAC Gender Justice and Diversity Program’s Engage Men and Boys Network for Promoting Gender Justice Bangladesh project, a symbolic youth parliament organized at Uddipan Training Center in Pirojpur titled ‘Prevention of Violence against Women and Children, Current Context and Media Role’. The journalist leaders said this in a media mobilization meeting. At that time, 20 media workers of various print and electronic media were present.

President of Pirojpur Press Club Munizzaman Nasim presided over the function and General Secretary of Pirojpur Press Club Fasiul Islam Bachchu, Sadar Area Manager (Health) of BRAC Md. Bashiruzzaman and other journalists spoke as guests. Chairperson of the Symbolic Youth Parliament Aminul Islam (Firoz Mostafa) was present on the occasion. At the beginning of the program, a brief introduction of the project and the purpose of media mobilization, and why the involvement of men and boys is needed is highlighted. At the end of the presentation of the main concept paper, an awareness video on the prevention of violence against women and children was shown. In the open discussion session, the speakers formulated recommendations identifying the role, obstacles, and areas of action of the media in stopping gender-based violence.

The journalists expressed their determination to publish more follow-up news in this regard by presenting the case study of women and child abuse to the media personnel.

In addition to various issues, if the investigation report on the image of violence against women and children is published, the image of the related violence will be reduced a lot.

The speakers pledged to use the language and images of reporting violence against women and children sensitively, ensuring sexual and reproductive health rights and inclusion of sex education in the curriculum, inclusion of young people in all activities, political and religious institutions, women’s employment and safe environment and gender-sensitive programs. Recommend publicity in the media.