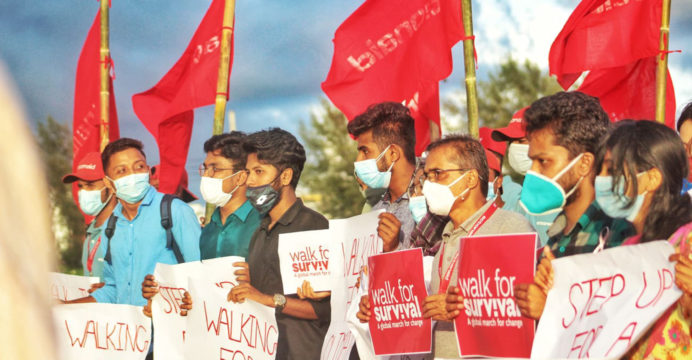 Walk for Survival: Walking in Cox’s Bazar to protect the climate and women

ActionAid Bangladesh marched on Cox’s Bazar beach to demand climate justice and gender justice. More than 100 people took part in the walk titled ‘Walk for Survival’ on Tuesday (20 October) afternoon. It called for an end to gender-based violence in the world, the establishment of justice, and the creation of more developed and beautiful world order through the restoration of green forests to protect the environment.

The walk started from Kalatali’s point of Cox’s Bazar beach at 4 pm. It ends at Laboni Point. Representatives of ActionAid Bangladesh and Youthnet for Climate Justice, a local environmental organization in Cox’s Bazar, also took part in the march. This is a beginning part of the international campaigns against climate and growing injustice against women.

Tanjir Hossain, head of ActionAid Bangladesh’s Resilience and Climate Justice Unit, said, “We are constantly being displaced due to the climate crisis.” People are forced to lose their homes in disasters like floods and cyclones and seek shelter in shelters. Tanjir Hossain also said that the march was organized to show solidarity with the displaced people and victims of gender-based violence around the world due to the impact of climate change.

Meanwhile, Abdul Alim, head of Humanitarian Response at ActionAid Bangladesh, said the level of natural disasters had recently risen. This year we have faced a number of natural disasters due to the effects of climate change. Had to respond. Moreover, the COVID-19 epidemic has pushed many people into poverty. It is important to ensure the protection of the environment and the atmosphere to survive the disaster.

Anhara Rabbani, another ActionAid official who works on climate justice, said the climate crisis has threatened natural biodiversity. We have to take initiative now to resolve the crisis.

Sohanur Rahman, the coordinator of Youthnet for Climate Justice, said Bangladesh is one of the most endangered countries in the world due to climate change. A bill was passed in the parliament in 2019 declaring climate change as a ‘planetary emergency’. However, the people of Bangladesh are not responsible for this global crisis. But we are going to be the ruthless victims of this crisis. Our young communities, women, and children are at great risk. The ‘Walk for Survival’ rally calls for urgent action to address global justice, the adverse effects of the climate crisis, and the prevention of gender-based violence against women and children.