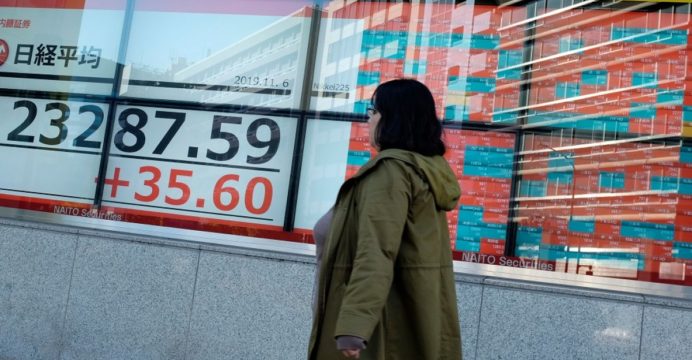 Tokyo stocks opened higher on Friday, extending rallies on Wall Street on revived hopes for US stimulus, and helped by a cheaper yen.

“Japanese shares are supported by rallies in US shares and the dollar-yen rate at around 106 yen,” said Yoshihiro Ito of Okasan Online Securities.

Japan’s household spending in August was down 6.9 percent year-on-year, against market expectations of a 6.7 percent decline, according to data released by the internal affairs ministry before the opening bell.

The latest figure is the 11th consecutive monthly decline, after a 7.6 decline in the previous month, with the country suffering the impact of the virus pandemic.

Takeda Pharmaceutical was up 1.70 percent at 3,717 yen after it announced a Covid-19 treatment project in which it is involved is now launching a phase 3 clinical trial with patients in the United States.

The project, backed by the National Institute of Allergy and Infectious Diseases (NIAID), if successful, may eventually “become one of the earliest treatment options for hospitalised Covid-19 patients,” it said.

On Wall Street, shares rose amid conflicting signs on the prospects for more US stimulus, with the Dow jumping 0.4 percent to close at 28,425.51.