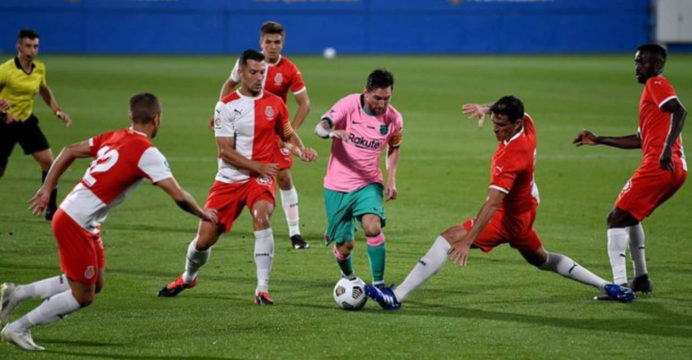 Barcelona picked up their second win in a pre-season club-friendly. Lionel Messi scored two goals in Wednesday’s 3-1 win over Girona.

Philippe Coutinho put Ronald Koeman’s side ahead in the 21st minute. Coutinho scored with great skill between Messi and the newly signed Francisco Trincomalee. Earlier, one of his shots hit the crossbar and came back. Messi doubled the lead in the very last minute of the first half. This is Messi’s first goal for Barcelona since failing to leave the club last month.

Samu Siaz scored a goal for Girona within minutes of the start of the second half. But in the 51st minute, when the Barcelona captain scored again, the team was assured of victory. Once again, Messi’s powerful shot from outside the box found the net.

From the first match, Barcelona seemed more confident yesterday. Messi was comfortable, the Portuguese Trinaco also showed confidence. Teenager Pedri was Barcelona’s most confident substitute. After taking the field, he took three shots in a row. Two of the shots were somehow blocked by Girona goalkeeper Jose Suarez.