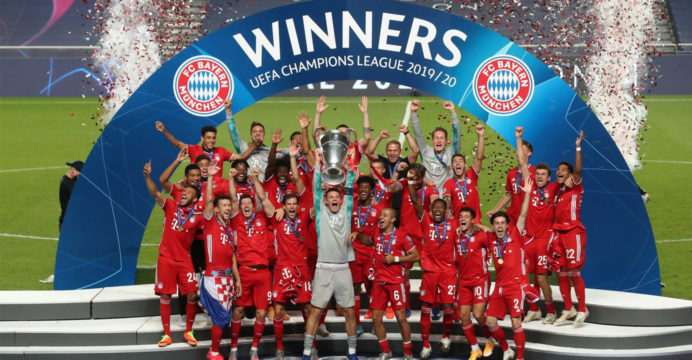 German giants Bayern Munich clinched the Champions League title for the sixth time, beating Paris Saint-Germain (PSG) 1-0 in the final with a goal from Kingsley Koeman.

In the 59th minute of the match in Lisbon, Former PSG player Koeman’s kick found PSG’s goalpost. Koeman’s goal gave Bayern both the victory and the title. This is the Bavarians’ third title of the season after winning the Bundesliga and the German Cup. Bayern has been unbeaten in the entire tournament. On the other hand, PSG failed to keep the memory of reaching the final sweet for the first time.

PSG also got no less of a chance to score at the spectator-free stadium of Estadio da Luz in Lisbon. But under Hansie Flick, who replaced Nico Kovac in November, Bayern seemed to be unstoppable in both defense and attack.

“I’m really proud of this team,” Flick told Sky Germany at the end of the match. “When I started in November there was just news of failure all around. But the way the team has improved itself is remarkable. PSG’s attack is very strong. But we deserved to win the final.”

Although the fate of the match could have been different. PSG could have gone ahead if Killian Mbappe’s shot had not been caught by Bayern goalkeeper Manuel Neuer just before the break. If the World Cup-winning forward had won tomorrow, his team could have become the second French team after Marseille in 1993 to excel in European football.