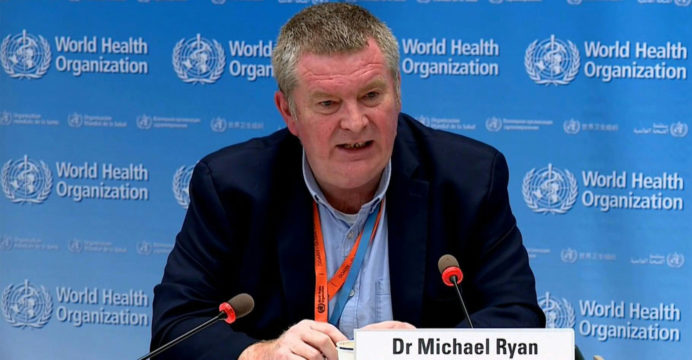 Wuhan not necessarily where coronavirus crossed from animals into humans: WHO

Although the primary clusters of atypical pneumonia were described in Wuhan, China, it doesn’t inevitably mean that is where the COVID-19 pandemic crossed from animals into humans, a senior World Health Organization (WHO) specialist stated on Monday.

Dr. Michael Ryan, working as executive director of the WHO Health Emergencies Program, stated at a regular COVID-19 announcement on Monday that a much more “extensive retrospective epidemiological study” should be taken to fully assume the links between the cases.

He stressed the need to start studies on the first described human clusters in order to systematically look for the “first signal at which the animal-human species barrier was crossed,” before moving to the investigations on the animal side.

The World Health Organization’s advanced team that flew to China in preparation for an international mission of recognizing the zoonotic source of COVID-19 has concluded its mission recently, according to the WHO specialist. Future studies will build on the initial investigations done by Chinese experts around the Wuhan seafood market.

Ryan also noted that WHO is moving forward with agreeing on the international team and ensuring that the right expertise will be in place to work with the Chinese counterparts to design and implement further studies.