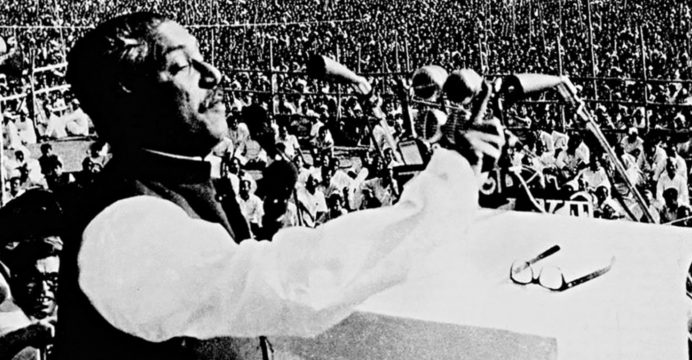 The Bangladesh cabinet has today adopted a proposal to announce March 7 as the “National Historic Day” to be celebrated every year nationally for remembering the memory of the 7th March Speech of Father of the Nation Bangabandhu Sheikh Mujibur Rahman.

The resolution came from a cabinet meeting with Prime Minister Sheikh Hasina in the chair.

“The cabinet today gave consent to a proposal regarding the declaration of March 7 as the ‘National Historic Day’ and include it into the Ka Serial list of the cabinet division notification to observe the day,” Cabinet Secretary Khandker Anwarul Islam said in a news briefing after the cabinet meeting.

Prime Minister Sheikh Hasina joined the meeting from her official residence Ganabhaban with ministers and secretaries attending it from the Bangladesh Secretariat here through a videoconference.

Mentioning a High Court rule upon a writ petition that asked the Bangladesh government to declare March 7 as the “National Historic Day” and issue a gazette notification to this effect and set up Bangabandhu’s mural at districts and Upazilas, the cabinet secretary said that the government has undertaken various development programs under a master plan through which murals are being built.

The government’s top official also asked the Cultural Ministry to notify the High Court about the master plan to this respect as the court issued (second part) the rule as it was not informed of the matter.