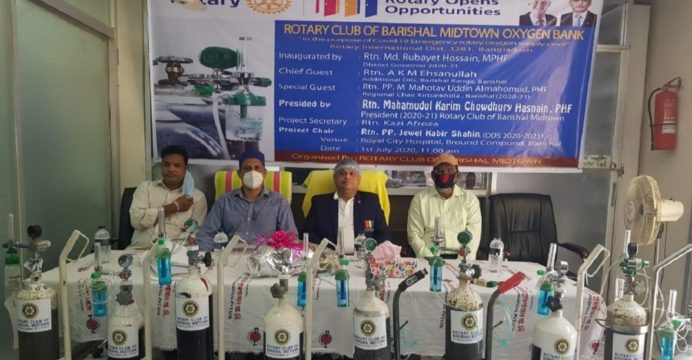 Royal City Hospital was thanked by all for becoming a partner and supporting this initiative. The project has also been co-supported by Rotary Clubs of DHAKA CENTRAL and Rotarian Nahar Ferdousi Begum of RC of Dhaka North West. The inaugural program started with Quran tilawaat by president Rtn Md. Ismail Hossain Seraji, Rotary Club of Shyamoli Dhaka.

The essential health related support service will be operational at Royal City Hospital, Barishal which is our health project partner and serve 6 southern districts of Bangladesh. District Governor, District 3281, Md Rubayet Hossain inaugurated the OXYGEN Bank project and spoke on uplifting the health support in the Barishal Division. He recommended in introducing high flow Oxygen machine and urged all affluent citizens to come forward with financial support as health and life safety is more important than keeping money in the bank.

He thanked the Rotary Club of Club of Barishal Midtown in steering the project and also thanked Rotary Club of Dhaka Central, other Rotary Clubs and Rotarians for their gracious participation. Chief Guest at the opening session was Rtn AKM Ehsanullah, Additional DIG, Barishal Range, Bangladesh Police. He not only spoke as the Chief Guest but also as a club member and felicitated the club for taking up such a commendable project in the 1st Day of Rotary Year.

He also thanked District Governor Md Rubayet Hossain to grace the event and inaugurate the OXYGEN BANK Project. Special Guest was Rtn PP Mahotav Uddin Al Mahomud and he spoke about the need of the oxygen bank in the region. The Project Chair Rtn PP Jewel Kabir Shahin also physically graced the occasion. The Event was telecasted live through ZOOM and many Rotarians across Bangladesh joined.

Presidents of Shyamoli, Dhaka and Dhanmondi Central also joined the meeting and supported the endeavor.  As Rotary Opens Opportunities, this project opens the opportunity for people to survive by taking the support of the OXYGEN BANKS. The Event was participated by other dignitaries and fellow Rotarians from the Barishal Region.