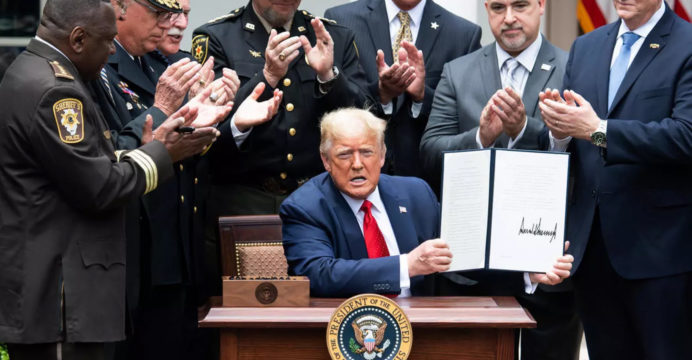 US President Donald Trump on Tuesday signed an executive order aimed at improving policing in USA. Protests erupted in Minneapolis on May 25 after an unarmed black man named George Floyd was killed by white police.

The president signed the executive order in the wake of continuing nationwide protests against racism and police brutality. In this order, it has been said that the police rule of strangling someone has been canceled. However, if a police officer feels that his life is in danger, he can apply this method.

In addition to this, the reforms include increasing grants to increase the prudence of the police and the initiative to enable the police along with the social workers to acquire skills to assist in local work. There is also the recruitment of skilled manpower in the police service, the sharing of police information with poor records and the allocation of funds to assist police personnel engaged in complex duties related to the work of mental and drug addicts.

At the signing ceremony at Rosegarden, Trump said “we should break down old patterns of failure.” He described the initiative as “a safe, beautiful and elegant step towards justice.