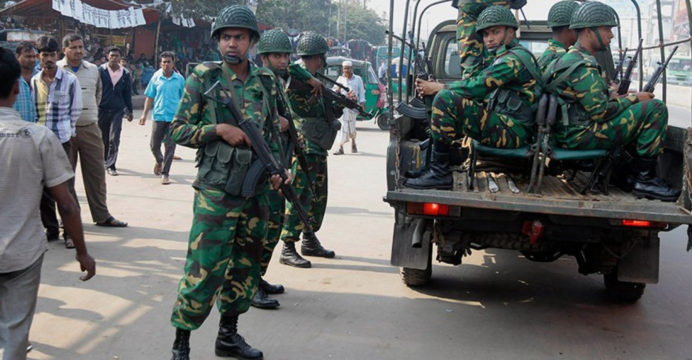 The armed forces have detailed their modus operandi in combating COVID-19 nationwide by enforcing social distancing and other cautionary measures in coordination with civil administration, hours after the government said the troops were called out “in aid to civil power”.

“The armed forces will discharge the responsibilities in divisional and district towns for social distancing and cautionary measures, the task which they are entrusted with,” defense ministry’s Inter-Service Public Relations Directorate (ISPR) said in a statement yesterday evening.

It said personnel from all the three armed services of army, navy and air force would be on duty in taking precautionary measures against the spread of COVID-19.

The statement said the military troops in coordination with deputy commissioners would review measures for treating coronavirus infected patents and quarantining suspects and particularly oversee if anyone who returned from abroad was defying mandatory quarantine order.

“The district magistrates (deputy commissioners) will request the local army commanders to review situations in line with the law,” it read.

The statement said the naval forces would be on duty in coastlines to extend their assistance to the local administrations while air force would mobilize their resources in reaching necessary medical equipment and emergency transportations.