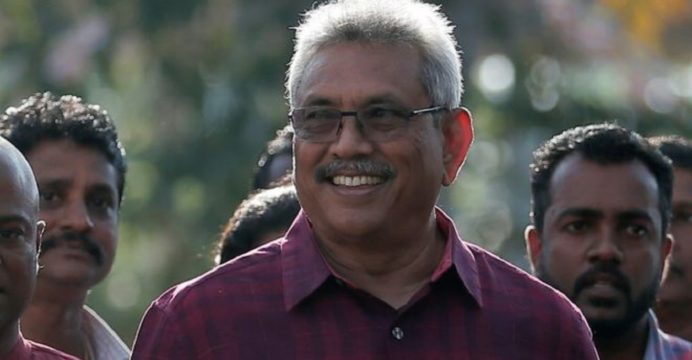 The election is Sri Lanka’s first since a terror attack killed more than 250 people in April. A total of 35 candidates were vying for votes in the presidential election, the third since the end of the country’s decades-long civil war in 2009, reports BBC.

Mr Rajapaksa is a polarising figure who was seen as one of two front-runners in the race, along with government minister Sajith Premadasa.

The country’s current president, Maithripala Sirisena, was not on the ballot. He decided against running after coming under criticism following the Easter Sunday bombings.

The government was forced to later admit it had suffered a “major intelligence lapse” after failing to adequately share information from Indian intelligence officials about a potential attack.

The attacks have been followed by an economic slump, with the country’s tourism sector particularly hit.

WHAT DO WE KNOW ABOUT THE RESULT?

Electoral officials said at least 80% of the electorate came out to vote.

Mr Premadasa had 45.3% of the vote with Mr Rajapaksa on 48.2%, with about a quarter of the votes counted, election commission officials said.

Mr Rajapaksa’s spokesman said he expected to win with 53-54% of the final vote. Soon afterwards, his main rival publicly conceded.

“It is my privilege to honour the decision of the people and congratulate Mr Gotabaya Rajapaksa on his election as the seventh president of Sri Lanka,” Mr Premadasa was quoted by AFP as saying.

An official result will “hopefully” be announced by 16:00 local time (10:30 GMT) on Sunday, the Election Commission Chairman told reporters.

WHO WERE THE FRONT-RUNNERS?

Retired lieutenant colonel Mr Rajapaksa, 70, is a divisive figure who spent a decade as defense secretary under his brother’s presidential rule.

The Podujana Peramuna (SLPP) party candidate is known for his role in helping to end the country’s civil war and has positioned himself as a strong figure who can combat national security fears,

He is popular among Sinhalese-dominated parts of the island, but is disliked by Tamils because of his alleged links to human rights abuses carried out during the final stages of the civil war.

He was in power when thousands of people – particularly Tamils – went missing in what have been described as enforced disappearances between 2005 and 2015.

Ruling party candidate Mr Premadasa, focused on social issues as well as security – campaigning on a promise to eradicate poverty and improve housing.

He is the son of a president who was assassinated by Tamil Tiger rebels in 1993 and is the current housing minister.

Like his rival, he already has a loyal support base and has managed to take on the Rajapaksa family in their own region.