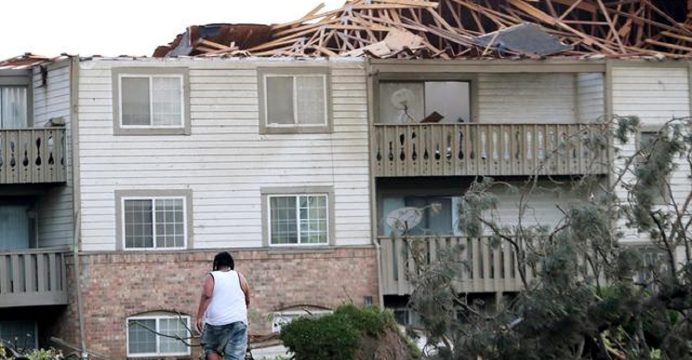 A tornado pulverized buildings around Dayton, Ohio, early on Tuesday, injuring at least 35 people and requiring emergency officials to send out snowplows to clear debris from a major highway, officials and media reports said.

At least two other tornadoes touched down near the city, including one near Wright-Patterson Air Force Base, just east of the city, media reports said.

At least 35 people in and around Dayton went to hospitals with injuries, most of them minor, according to Elizabeth Long, a spokeswoman for the Kettering Health Network, reports Reuters.

“We’ve had injuries ranging form lacerations to bumps and bruises from folks being thrown around in their houses due to the storms,” she said. 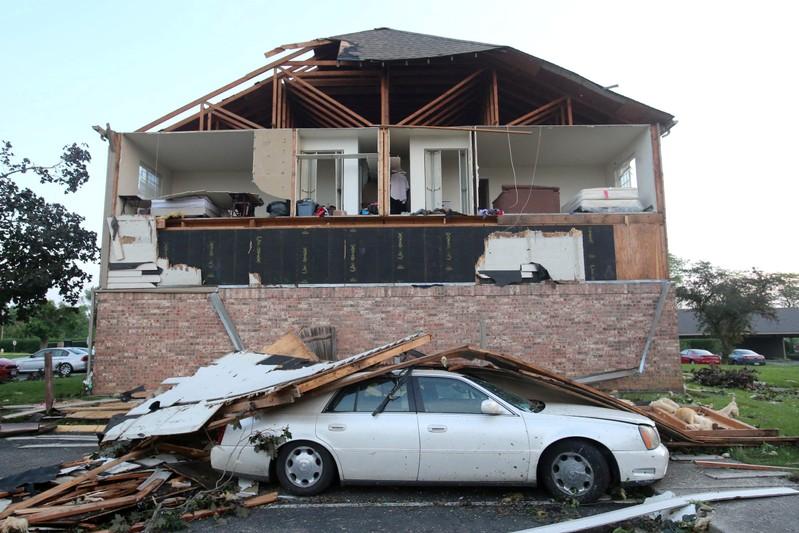 A car is covered with debris that was ripped from an apartments building after a tornado touched down overnight in Trotwood near Dayton, Ohio

There have been no reports of fatalities.

“We had a great warning system in the area,” Long said.

The latest storm follows tornadoes and floods killed at least six people in Oklahoma during the previous week, including two people in El Reno on Saturday.

More than 60,000 homes and businesses in Ohio were left without power on Monday morning, according to the PowerOutage.US tracking service, and officials advised people to boil water after water plants and pumps went out of service.

The extent damage in Ohio was not clear yet.

“We’re right in the middle of it right now. It’s a mess,” said a phone operator with the Office of Emergency Management in Montgomery County.

Some media outlets reported that rescue workers were going door-to-door in parts of Dayton.

Twitter users posted images of debris flying in the air and damaged mobile homes and cars.

The National Weather Service said multiple tornadoes were reported in the Dayton area between 11 p.m. Monday and 1 a.m. Tuesday.

“The storm system is weakening as it pushes into West Virginia and Virginia, but along with the winds, it has dropped about two or three inches 3 inches (5-8 cm)of rain in just two hours,” said Zack Taylor, a meteorologist with the NWS Weather Prediction Center in College Park, Maryland.

Seven people were reported injured in the storm in Pendleton, Indiana, on Monday, about 100 miles (160 km) west of Dayton, according to media reports. More damage was reported in Celina, Ohio, about 78 miles (125 km) north of Dayton.

Flooded areas of Arkansas and Oklahoma were bracing for more rain that will feed the already swollen Arkansas River, forecasters said on Monday. Arkansas, Oklahoma and Missouri have all activated National Guard units to respond to the storms.

Millions of Americans were under flood warnings on the Memorial Day holiday. Deluges hit Kansas, Nebraska, Iowa and Illinois.

In Tulsa, officials were monitoring the Arkansas River after the U.S. Army Corps of Engineers raised the flow at the upriver Keystone Dam by 65% since last week to 275,000 cubic feet per second. The heavier flow is testing two aging levees in Tulsa, the city said.