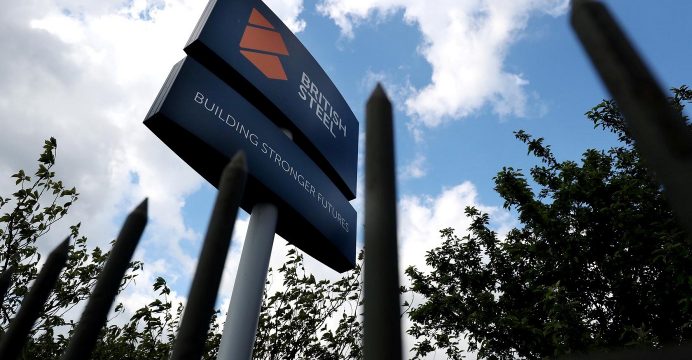 British Steel has been placed in compulsory liquidation, putting 5,000 jobs at risk and endangering 20,000 in the supply chain. The move follows a breakdown in rescue talks between the government and the company’s owner, Greybull.

The Government’s Official Receiver has taken control of the company as part of the liquidation process. The search for a buyer for British Steel has already begun. In the meantime, it will trade normally, reports BBC.

The Official Receiver said British Steel Ltd had been wound up in the High Court and the immediate priority was to continue safe operation of the site.

The company was transferred to the Official Receiver because British Steel, its shareholders and the government were not able to, or would not, support the business. That meant the company did not have to funds to pay for an administration.

The other companies within the British Steel group are continuing to trade as normal and are not in insolvency.

SO WHAT HAPPENS NOW?

The Official Receiver and EY are looking for a buyer for the business. If they fail to find one, the firm would be wound up and redundancies would follow.

“I appreciate that this is a difficult time for the company’s employees and I want to thank them for their ongoing co-operation,” Receiver David Chapman said.

“The company in liquidation is continuing to trade and supply its customers while I consider options for the business.

WHAT ABOUT THE STAFF?

British Steel has about 5,000 employees. There are 3,000 at Scunthorpe, with another 800 on Teesside and in north-eastern England.

The rest are in France, the Netherlands and various sales offices round the world.

Their wages this week have been paid by Greybull and the government will pick up the bill from now on.

Roy Rickhuss, general secretary of the steelworkers’ trade union, Community, said: “This news will heap more worries on workers and everyone connected with British Steel, but it will also end the uncertainty under Greybull’s ownership and must be seized as an opportunity to look for an alternative future.

“It is vital now that cool heads prevail and all parties focus on saving the jobs.

Staff in Scunthorpe have also reacted. “Everyone is terrified,” said steelworker Kevin Prior. The 32-year-old scrap metal cutter has been at the plant since 2015 and his sister and brother-in-law also work at there.

He said rumors about the company’s future had been circulating for a number of weeks.

“It’s horrible to hear that my sister is crying herself to sleep because she doesn’t know what’s going to happen with her husband’s job and what that means for them.”

As well as the plant’s workers the North Lincolnshire town’s economy relies heavily on the giant steel works, with an estimated 20,000 jobs linked to the site.

Its closure would be a body blow, with some residents claiming it would leave Scunthorpe a “ghost town”.

HOW DID IT COME TO THIS?

In 2007, India’s Tata conglomerate entered the UK steel market after it bought the Anglo Dutch group, Corus. In 2010, the business was renamed Tata Steel Europe.

After a difficult few years, during depths of the 2016 steel crisis, Tata sold the Scunthorpe long products division to private equity firm Greybull Capital for a nominal £1.

British Steel’s more recent troubles have been linked to a slump in orders from European customers ‎due to uncertainty over the Brexit process.

It has also struggled with the weakness of the pound since the EU referendum in June 2016 and the escalating US-China trade war.

In a statement on Wednesday, Greybull said: “The turnaround of British Steel was always going to be a challenge, and yet the business overcame many difficulties and until recently, looked set for renewed prosperity.

“The workforce, the trade unions and the management team have worked closely together in their determination to strengthen the business. However, the additional blows dealt by Brexit-related issues have proven insurmountable.”

The High Court appointed accountancy firm EY to the role of Special Manager, assisting the Receiver.

EY said the appointment of the Official Receiver followed “a number of weeks” of negotiations by management with the company’s various stakeholders, including lenders, shareholders and the government, to secure the necessary funding to avoid an insolvency.

“Regrettably, these efforts were unable to secure a solution before the company’s funding resources were exhausted.”

HOW HAVE CUSTOMERS REACTED?

In a statement, the rail infrastructure operator said it had been working closely with British Steel and the government for “many weeks”.

“We have done what we can to help ease the company’s financial difficulties. We have improved our order book with the company – increasing rail production volumes, bringing orders forward and committing to a long term schedule – as well as offering immediate payment to ease the pressure on cash flow.”

It is understood the company has enough stockpiles to keep it going until other suppliers can increase production.

WHAT DO THE POLITICIANS SAY?

Business Secretary Greg Clark said the government had shown its “willingness to act”, having provided the British Steel with a £120m bridging loan in April to meet EU emission rules and avoid a steep fine.

However, he added: “The government can only act within the law, which requires any financial support to a steel company to be on a commercial basis. I have been advised that it would be unlawful to provide a guarantee or loan on the terms of any proposals that the company or any other party has made.”

She said: “The government must act quickly to save this strategically important industry and the livelihoods and communities of those who work in it, by bringing British Steel into public ownership.”