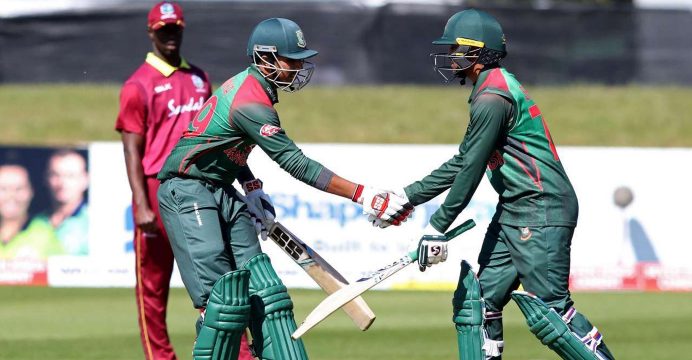 Bangladesh brought up a watershed moment in their cricket history, having clinched their first major trophy in a tournament involving three or more teams as they secured a five-wicket victory over West Indies in the tri-series final at the Malahide in Dublin on Friday.

Two youngsters Soumya Sarkar and Mosaddek Hossain Saikat were the key in bringing up landmark moment in the country’s history.

While Soumya Sarkar set the platform upfront with 41-ball 66, Mosaddek gave the finishing touch in even more gorgeous fashion, smashing 24-ball 52 not with two delightful fours and five sixes. Mushfiqur Rahim was the other notable scorer with 22-ball 36.

The fifty came at a moment when Bangladesh’s victory looked doubtful after West Indies hit back in the game through some disciplined bowling midway through the game.

The key moment of the match was the 22nd over when Mosaddek took threatening Allen in disdain to score 25 runs with three sixes and one four. That sealed the fate of the game in fact.

Earlier, Bangladesh restricted West Indies to 152-1 after the game turned out to be 24-over-affair.

Opener Shai Hope was the top-scorer for the side with 64-ball 74, smashing six fours and three sixes. His opening partner, Sunil Ambris was not out on 69 with Darren Bravo on 3.

Being sent to bat first, West Indies went unscathed to reach 131 for no loss in 20.1 overs before the rain interrupted the proceedings of the match.

After several inspections, the match restarted.

Bangladesh earlier lost six finals in major tournament but they came into the match with clear favorite having beaten twice West Indies in the group fixture. Hosts Ireland was the other team in the tournament.