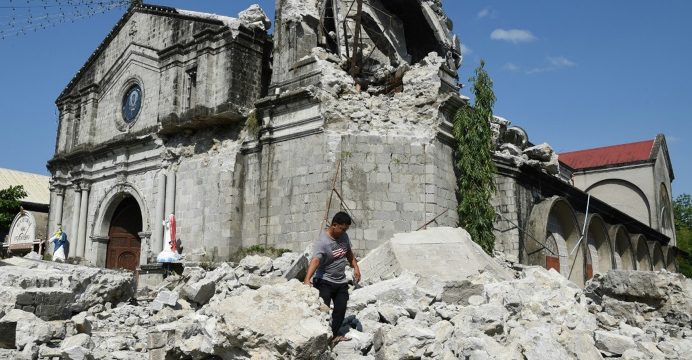 Philippine rescuers raced Tuesday to reach some two dozen people still feared buried under a building near Manila that collapsed a day earlier in a deadly earthquake, as a powerful second tremor hit the nation.

The US Geological Survey put the second quake — on the central island of Samar — at 6.4 magnitude, stronger than the one that wrought significant damage Monday near the capital in the north.

“No one started crying, but of course some panicked because it was really strong,” said Rey Estrobo, a supervisor at a hotel in Borongan town, near the epicentre.

At the same time, the toll in Monday’s quake rose to 16, with most of the fatalities in the worst-hit northern province of Pampanga, national disaster officials said.

More than 100 others were injured by falling rubble on Monday, including in Manila, according to police.

However, initial reports indicated relatively minor destruction in Samar given the strength of Tuesday’s quake, which could be down to differences in ground composition.

“The damage is more pronounced if the houses and buildings are built on a foundation of soft soil,” seismologist Myla Advincula told AFP, referring to Pampanga’s soft sediment. “It enhances the shaking effect.”

Scores of rescuers in the northern town of Porac spent Tuesday using cranes and jackhammers to peel back the pancaked concrete structure of a four-storey market building where the Red Cross said 24 people were unaccounted for.

“Every minute, every second is critical in this rescue,” Cris Palcis, a volunteer rescue dog handler, told AFP. “Time is short for the people under the rubble so we have to be quick.”

Pampanga Governor Lilia Pineda told journalists that rescuers could still hear at least one person trapped beneath the rubble, but the digging was proceeding delicately to avoid accidentally crushing the survivor.

Rogelio Pacelo was shopping with his wife and child when the market building collapsed around them, but they incredibly made it out almost without a scratch.

“I thought this only happens in movies. I thought that was the end of the world, it’s our end,” he told journalists. “I looked for a way out.”

The quake also damaged several centuries-old churches which were crowded with worshippers in recent days as the majority-Catholic Philippines marked the Easter holiday.