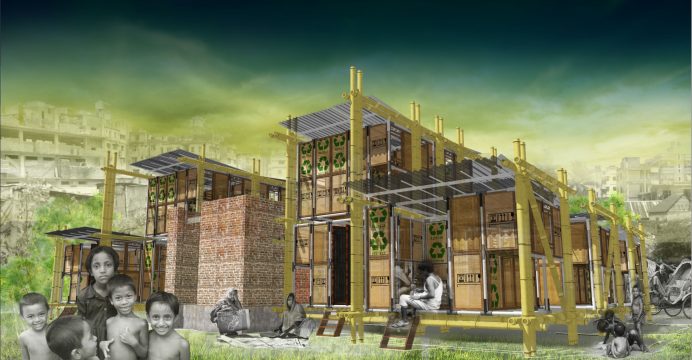 Housing solutions for the urban poor in Bangladesh

Low-income communities are struggling to find affordable urban housing in Bangladesh’s cities. Millions are heading to cities to tap into economic opportunities, causing booming urban growth. But many of them are facing skyrocketing property prices, a dysfunctional rental market, and limited public housing. Local authorities are falling behind on delivering affordable housing schemes. The outcome: low-income communities pay exorbitant rents to live in slums with poor services and no tenure security.

Take Dhaka, the world’s most crowded city. Over 17.4 million people reside in Dhaka and more are moving in. At least one in every three people live in informal settlements. The situation is rooted in a fragmented housing delivery system: the government meets only 7 percent of the annual housing demand and relies heavily on the private sector to fill in the giant gap.

Formal private housing supply is also limited, forcing low- and middle-income families to resort to costly informal arrangements. According to a 2017 study by Bangladesh University, on average, slum residents pay BDT 47 per square foot; this is twice the amount tenants pay for decent housing in areas such as Dhanmondi. 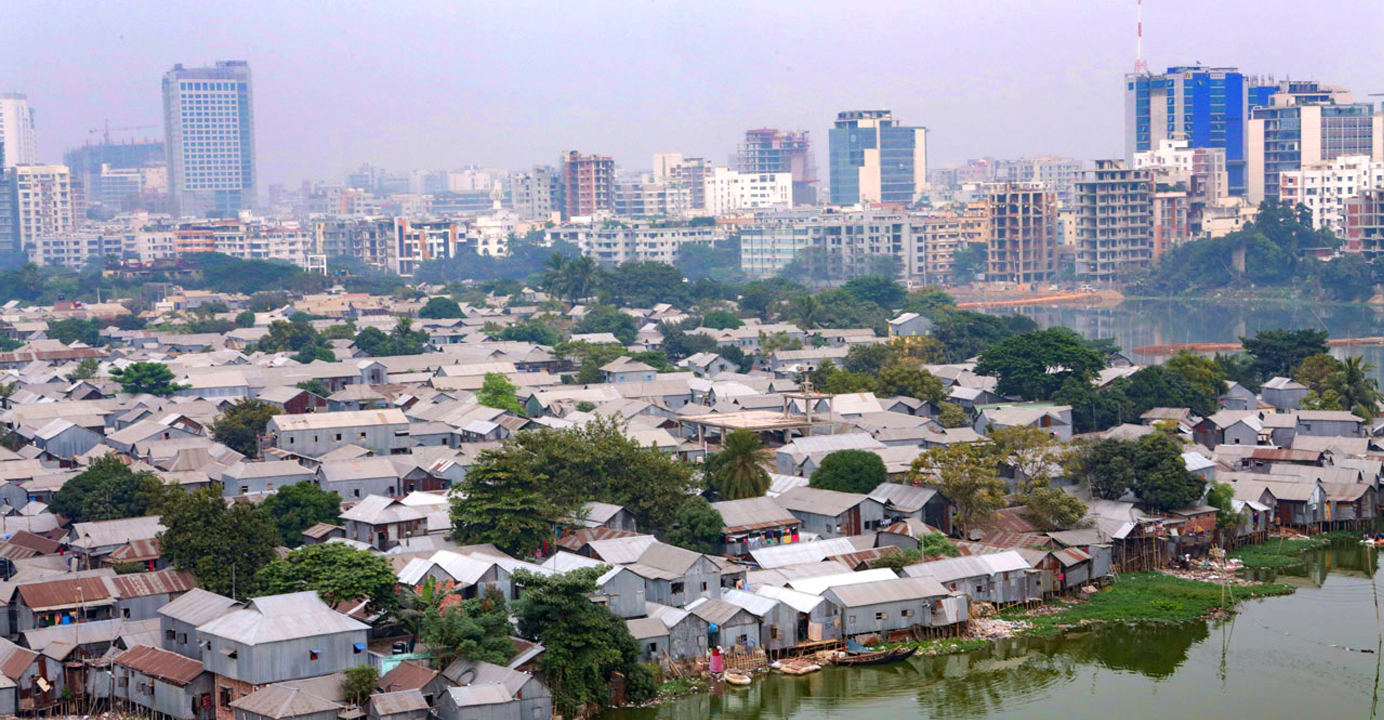 Bangladesh has been putting needed policies in place. For example, national development plans such as the Government’s 7th Five-Year-Plan (FY 2016-2020) emphasize affordable urban housing. Moreover, the Government has approved the ‘National Housing Policy 2017’ to address the fragmented policy response to housing challenges.

Despite progress on the policy front, the housing delivery system remains highly uncoordinated as public and private developers tend to work in silos. Moreover, in urban projects, private developers focus on upper- and upper-middle-income groups and public land allotments for the poor are negligible. RAJUK has reserved only 1.2%, 4.3% and 7.5% of land for low-income groups in the Purbachal, Uttara (3rd Phase) and Jhilmeel projects respectively. Complicated land and titling procedures, registration procedures and costs make accessing these allotments even more difficult.

Additionally, housing finance is limited, short-term and expensive given the absence of a well-functioning mortgage market. The market is small despite demand for low- and middle-income housing finance and it caters to affluent groups only. Also, state-owned finance providers often lack fund for their schemes in urban areas. Factors like these are feeding into challenges for developing affordable housing for low-income urban communities. 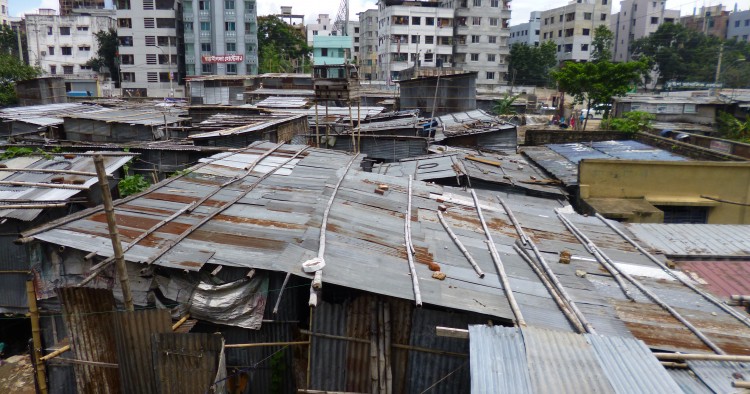 Some of these issues become more apparent when well-intentioned efforts backfire. Bhashantek Rehabilitation Project is such an example. In 1998, the Government undertook the BDT 341 crore project in Mirpur, Dhaka to build 7,560 flats for slum residents and low-income groups.

The Government fixed flat prices at rates that families could pay off in 10 years in monthly installments. Yet, the project got mired in irregularities and mismanagement. The private developer that won the construction contract sold of a section of the flats at higher prices to an affluent group. The Government eventually scrapped the costly project.

World Bank estimates that Bangladesh will need to build at least 8.5 million new houses in the next five years to overcome the existing shortage in urban areas. Most of the demand is expected to come from lower and lower-middle income groups. Given Bangladesh’s commitments to provide housing for all by 2021, how can Bangladesh overcome these challenges for providing affordable housing in urban areas to the poor?

WHO BELONGS TO THE HOUSING DELIVERY SYSTEM IN BANGLADESH? 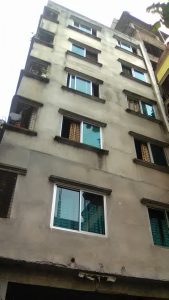 The apartment complex built by ARBAN in Mirpur, Dhaka

Despite the dismal situation, Bangladesh’s NGOs, universities and development partners are successfully testing small-scale and low-cost urban housing schemes. Take ARBAN, one of the first NGOs to pilot a low-income, urban housing project in Bangladesh.

By tapping into its micro-credit savings deposits and loan assistance, ARBAN built an apartment complex for 42-member households in Mirpur, Dhaka. The apartments were handed over in 2012. Building on success, ARBAN is taking on another housing project to construct apartments for 85 households on a 1 bigha plot at the city’s Rampura Banasree area.

In Jhenaidah, BRAC University collaborated with the Municipality, architects and a local NGO to build affordable homes through the ‘Jhenaidah Citywide Housing Process’. Through this community-led initiative, people identified their housing challenges, mapped out what they wanted to see in their neighborhoods and helped in the construction process. 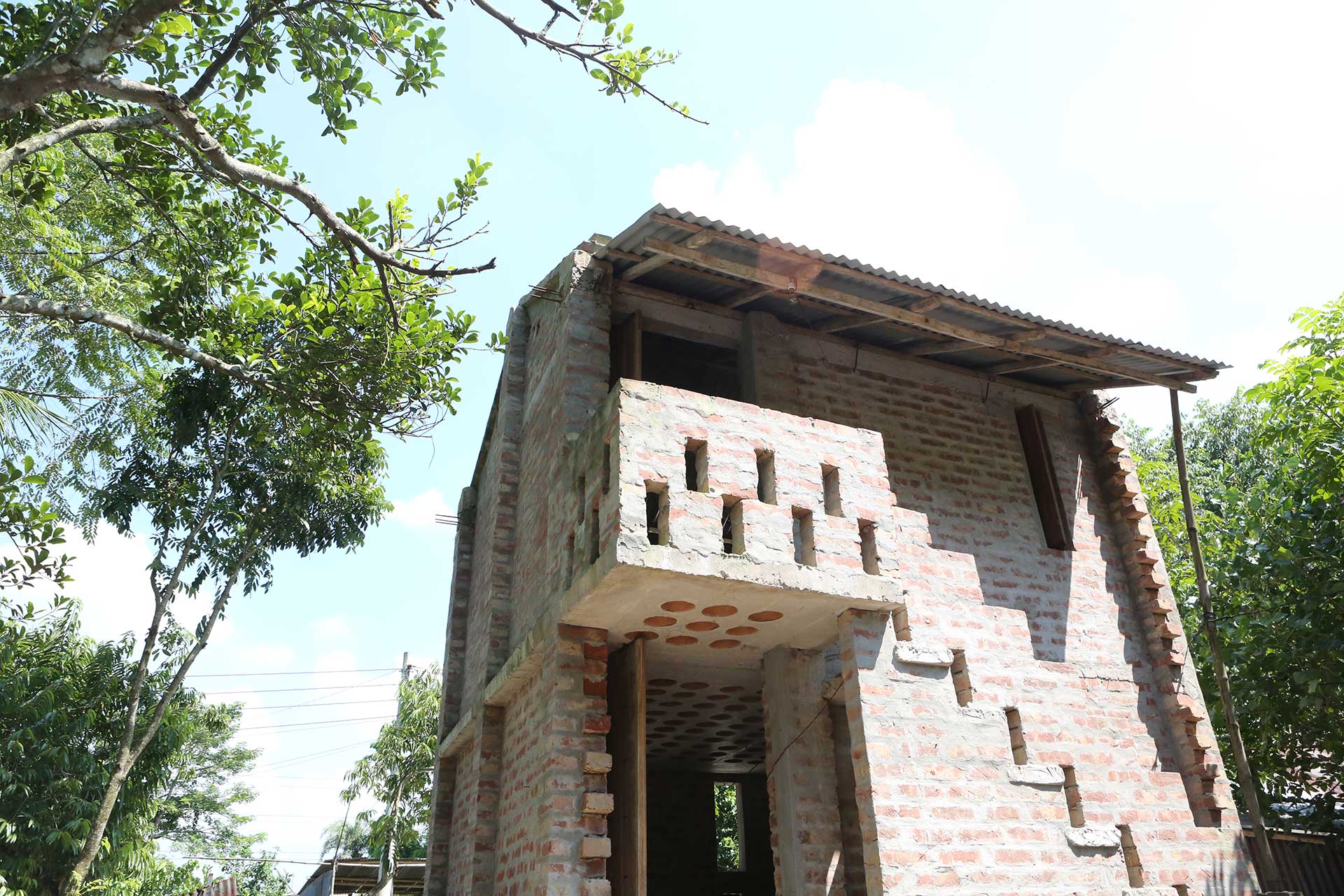 From 2008 to 2015, the Government of Bangladesh, UNDP and DFID ran the flagship initiative, “Urban Partnerships for Poverty Reduction (UPPR)’’ project, to meet the needs of marginalized and poor urban communities. In 2009, with UPPR’s support, Gopalganj municipality undertook a housing programme through which the municipality collaborated with the private sector and community to offer tenure security to 346 evicted families.

The families, alongside stakeholders, identified vacant government land in the Pourashava for resettling them. In 2010, following negotiations, the Ministry of Land allocated 4.16 acres on a 99-year lease to the Gopalganj Pourashava.

The urban poor communities, in collaboration with the Pourashava and with the technical assistance of UPPR and other partners, developed low-cost housing model through rigorous consultative and participatory processes. 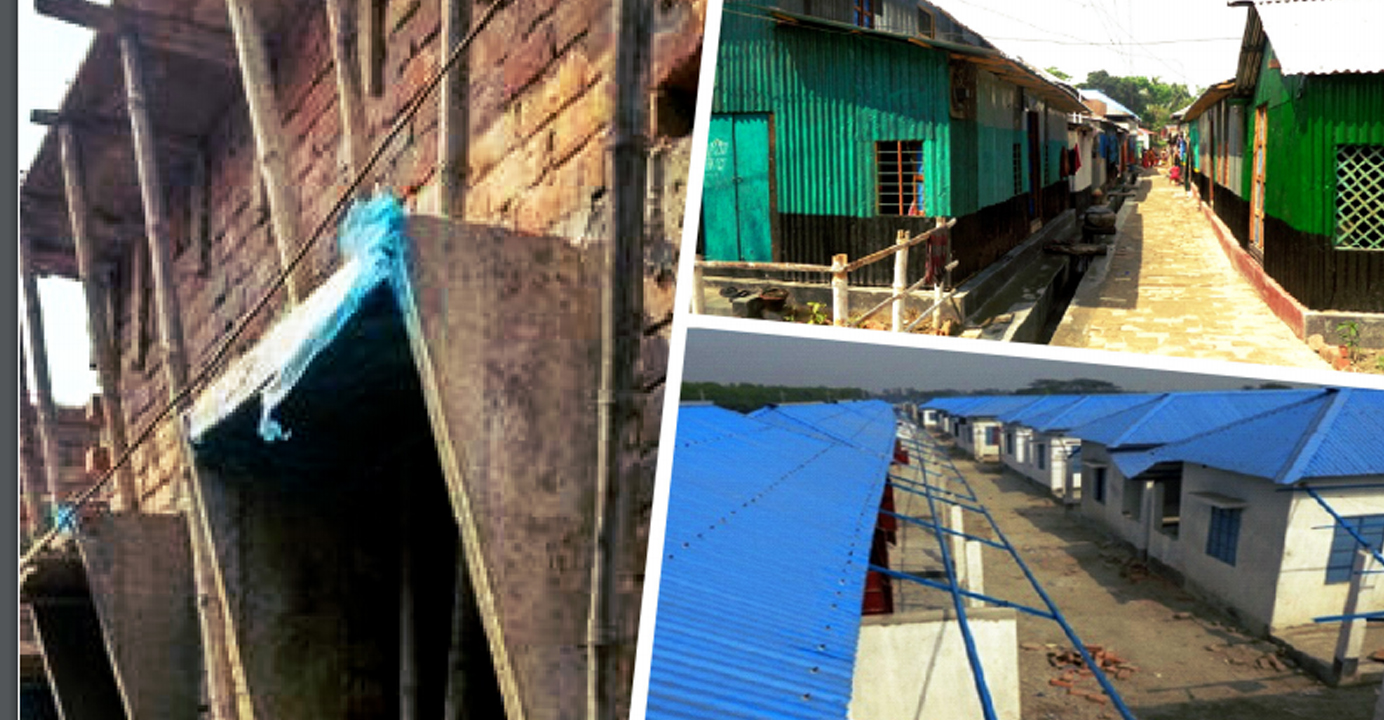 The development of Community Housing Development Fund (CHDF) was one of UPPR’s key outcomes; this is city/town-level community based specialized institution that supports tenure security and addresses housing finance challenges of the poor. For example, as noted in the Gopalganj, the CHDF was instrumental in negotiating the long-term lease on government land for 99 years with support from the local government institution. CHDF provides loans to target households at 10-12% interest rates and with a payback period of 5-7 years. CHDFs in Gopalganj, Sirajganj, Rajshahi, and Chittagong have already invested BDT 90 million and supported 300 households in their communities.

Building on UPPR’s successful experiences, Govt. of Bangladesh has recently approved the next generation urban poverty reduction program named ‘Livelihoods Improvement of the Urban Poor Communities’ popularly known as NUPRP. For the first time, the project will build 5000 new housing units for extremely poor families in secondary cities with GoB and UNDP’s support. Another 15000 families will receive financial support to build their houses through a housing finance facility that the project will help establish with UK aid’s support. 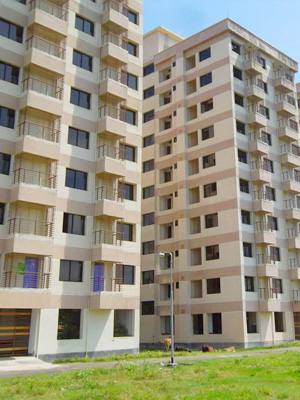 National Housing Authority (NHA), with the World Bank’s support, is undertaking a USD 50 million project to develop housing for the urban poor by 2021. 24,000 urban poor who live in informal and low-income settlements will directly benefit from this project. Using a community-driven approach, the Project will help low-income communities access infrastructure grants, and housing loans to improve housing and living conditions. Further, the Project will finance a credit line within PKSF to provide access to Partner Organizations (POs) for investing in the shelter in urban areas and to address the current gap in shelter lending programs among qualified microfinance institutions (MFIs), lenders and/or NGOs.

Through its “Subarna Prangon” project, Mohammadi Group (a leading RMG manufacturer) has been building housing facilities for 1200 garment workers in Dongri, Gazipur.

The facility will consist of two types of units: family and dorm units. Each unit will have an area of 619 square feet. The family units will have two double room living space, a shared kitchen, and toilet; 2-4 people will share rooms with common toilets in the dorms. 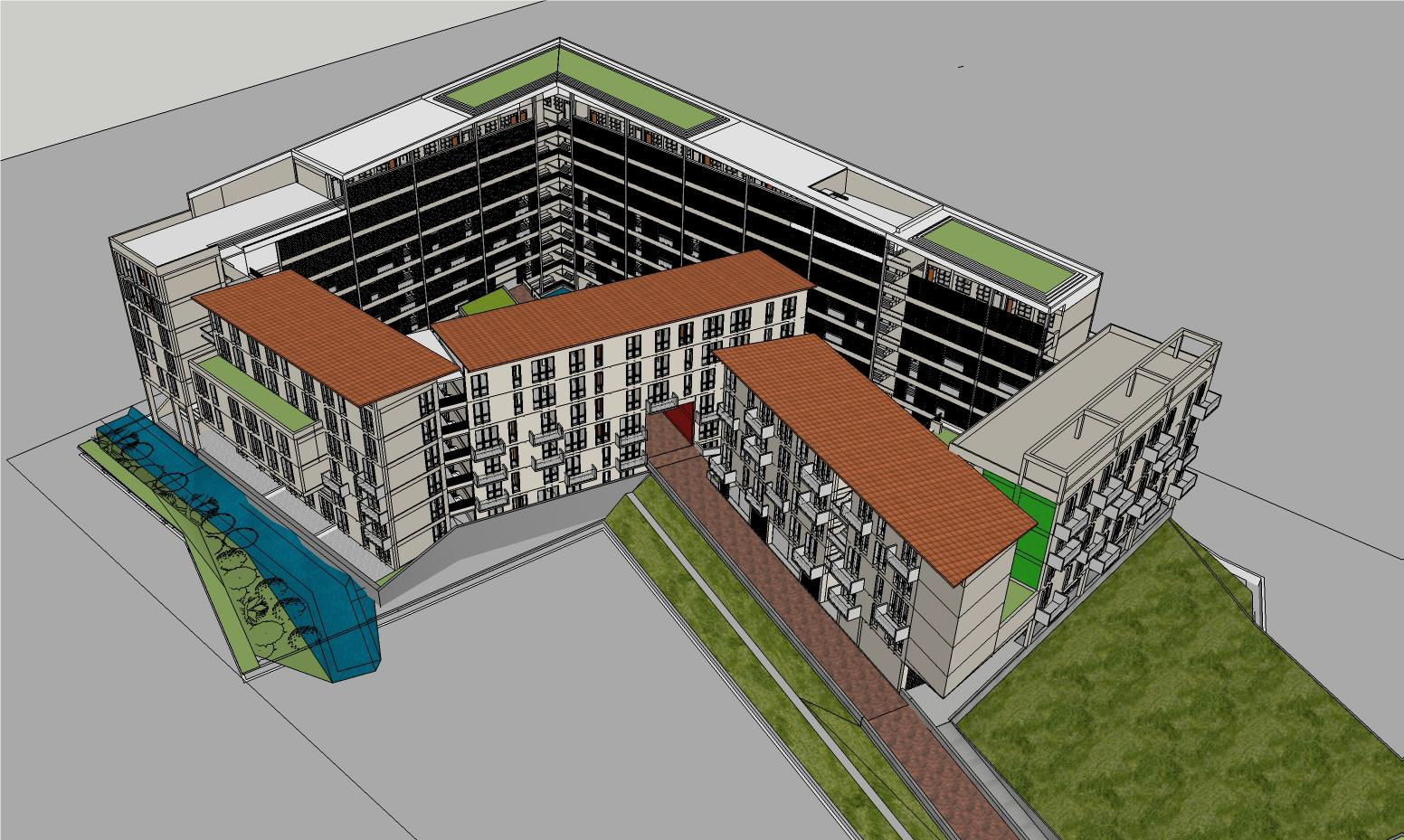 Design of housing model for the garments workers

The Project will cost an estimated BDT 31.61 crore and 1.7 acres of land has already been purchased. Bangladesh Bank is supporting the Project with loans at a nominal rate that can be repaid in installments.

The experiments in low-income housing provide some obvious answers for overcoming challenges. Bangladesh needs a strong policy framework and transparent institutions. Projects need to be well-monitored and innovative initiatives must be widely replicated for which partnerships among government agencies, the private sector, and development partners are critical.

But housing initiatives for the urban poor, big or small, will be difficult to run without introducing affordable housing finance schemes. 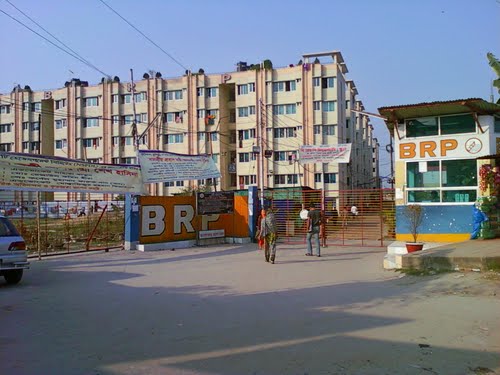 For example, more than 55,000 slum residents have accumulated BDT 12 crore in anti-poverty savings schemes through community development committees (CDCs) that UPPR helped establish. Further, the community members are running micro-businesses with the collateral -free loans that they took against the accumulated savings.

The newly launched ‘Build Bangladesh-UNDP SDGs Impact Fund’ can be another potential source for accessing urban housing finance for the poor. Unveiled at a joint event on the sidelines of the 72nd United Nations General Assembly in New York in 2017, the Fund aims to raise over USD 100 million from private investors willing to back profitable ventures that create positive social and environmental impacts in Bangladesh.

As a part of UNDP’s initiatives in Asia-Pacific to mobilize capital markets to fund development projects with competitive returns, the Fund started with a seed investment of USD 3.5 million to build affordable housing for urban migrants. It is a bold leap forward to engage capital markets to create positive social impacts such as offering affordable housing finance for the urban poor in Bangladesh.

Ashekur Rahman is an urbanist currently leading UNDP’s urban development and poverty portfolio in Bangladesh. He has been in this sector over a decade with various national-international organizations in home & abroad and offers top quality policy analysis, cutting edge advisory services and implementation of programme strategies focusing on innovation, evidence and transformative results. He has extensive experience and success in managing high impact development projects, advocacy campaigns and policy reform initiatives. He is an Economist and well-trained in leading the change management, social protection, smart cities, urban governance and land use planning.
7