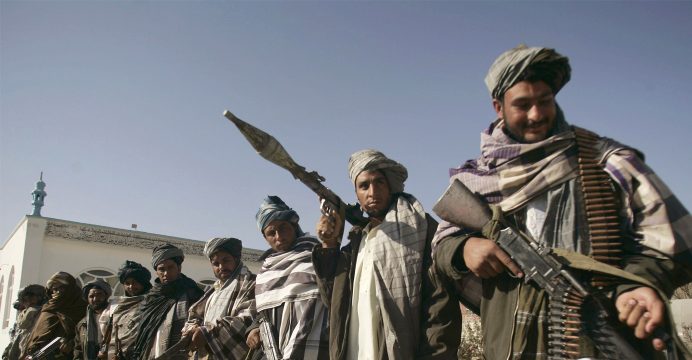 Taliban says peace talks with US continue with ‘care and vigilance’

Peace talks between the Taliban and the US are progressing on a “step-by-step” basis, a spokesman from the militant group said Sunday, following a bloody attack on a joint US-Afghan base claimed by the insurgents.

Meetings between the two sides restarted over the weekend in Doha after a temporary halt late last week to allow for “internal deliberations”.

“The current round of talks in Doha are advancing on a step-by-step basis. As the issue at hand is immensely crucial and delicate, it’s progression is taking place with that much care and vigilance,” said Taliban spokesman Zabihullah Mujahid in a statement sent to media.

The spokesman added the negotiations continue to focus primarily on a potential US troop withdrawal and a pact to prevent Afghanistan from being used as a safe haven for terrorists.

The latest meetings follow marathon talks in January that saw the US and the Taliban walk away with a “draft framework” on the two issues.

“It should be mentioned that no understanding has so far been reached about any agreement or document,” Mujahid added.

The US has not released a statement regarding the status of the talks.

A New York Times report published Thursday hinted that US forces could leave Afghanistan within five years under a Pentagon plan offered as part of a potential deal with the Taliban to end the nearly 18-year war.

The Taliban were quick to reject the claims, saying they were unaware of any such proposals made during the months-long diplomatic push.

The US has also pushed for a ceasefire and the opening of a dialogue between the Taliban and the Kabul government — demands that have been repeatedly rejected by the insurgents.

The continuation of the talks follows a major attack on a joint US-Afghan base in southwestern Afghanistan’s Helmand province Friday, with at least 23 security forces killed in the hours-long assault on one of the largest military installations in the country.

Heavy snowfall across large swathes of Afghanistan has led to a sharp reduction in violence this winter, but warmer weather in the country’s south will likely spark an increase in bloodshed with the arrival of the spring fighting season.

Analysts have warned that the Taliban are likely to ramp up attacks in the coming months as they seek to maintain momentum on the battlefield and leverage at the negotiating table.