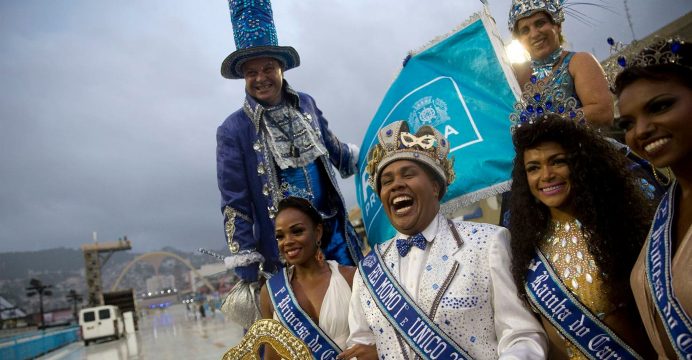 Rio de Janeiro’s fabled Carnival — one of the world’s biggest and most lively parties — kicked off Friday with the traditional symbolic passing of a key to the city to festival leader King Momo.

Once again this year, mayor and former evangelical Christian pastor Marcelo Crivella is sitting out the fun.

He sees all the debauchery — so much sweat, skin sequins — as less than ideal, and has cut public funding for the samba troupes who will strut their stuff over the weekend in half.

So Tourism Minister Marcelo Alves took his place for the opening
festivities.

Wilson Neto — the big, jovial man who plays King Momo — accepted the key in the Sambadrome in a shower of confetti, and then declared Rio’s legendary Carnival open.

The 14 elite samba schools in the “special group” will parade on Sunday and
Monday through the Sambadrome as they compete for the most prestigious
Carnival title.

Some of them have adopted themes highlighting women, blacks and indigenous people in Brazil — an in-your-face response to Brazil’s far-right President Jair Bolsonaro.

Starting Friday, the traditional “blocos” street parties were thumping in
Rio and other Brazilian cities such as Salvador, Recife and Sao Paulo.

Authorities expect seven million people — including one and a half million
Brazilian and foreign tourists — to participate in this gigantic outdoor
party.

In a country that is just edging out of severe economic crisis and a tense
electoral process, Carnival is a sacred ritual of collective catharsis.

Even Crivella could not be a total naysayer, saying in a video posted
Friday on social media: “May God protect us and make it a good carnival.”