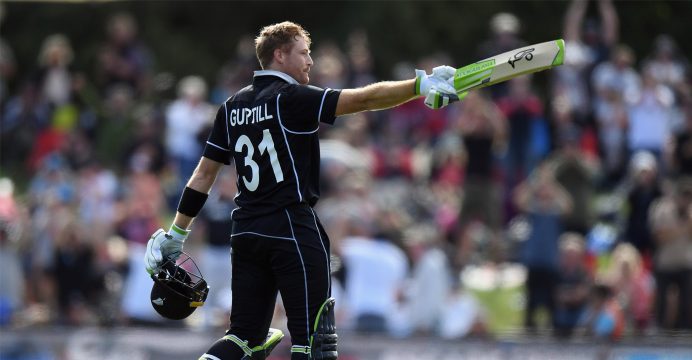 A second consecutive ton from Martin Guptill has eased New Zealand to an ODI series win against Bangladesh after an 8-wicket victory in Christchurch.

The Kiwis won the toss and sent the Tigers in to bat in the second ODI in the three-match series on Saturday .

Despite some resistance from Mohammad Mithun (57) and Sabbir Ahmed (43), the visitors were restricted to 226.

Lockie Ferguson was the best of the New Zealand bowling attack, taking 3-43, while Todd Astle and James Neesham took two wickets each.

The Kiwis were largely unperturbed once they picked up the bat.

Opener Guptill, whose 117* had taken New Zealand to victory in the first ODI on Wednesday, gave another dominant performance, scoring 118 before he was dismissed.

Kiwi captain Kevin Williamson (65*) then saw the hosts to victory.

Mustafizur Rahman was Bangladesh’s only wicket-taker, picking up 2-42.

The Tigers will look to pick up a consolation victory in the 3rd ODI at Dunedin on Feb 20.