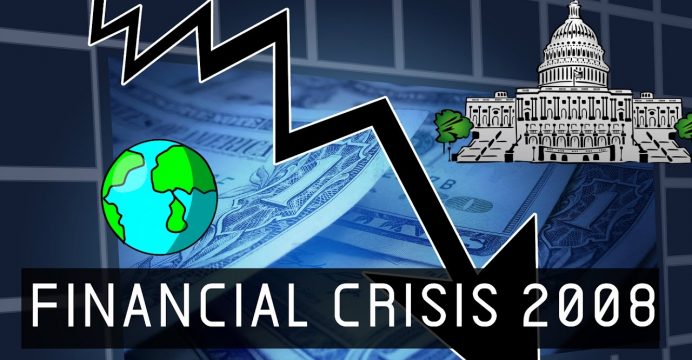 10 years on, still counting the cost of the financial meltdown of 2008

Lehman Brothers Investment Bank filed for bankruptcy on the 15th of September 2008.

Lehman was founded in 1850 by German immigrant brothers Henry and Mayer Lehman. It became a member of the New York Stock Exchange in 1887 and survived big market crashes and severe recessions of 1929 and 1987.

By 2008 it was the fourth-largest US investment bank, with assets between 600 and 700 billion US dollars. In the late 1990s, it ventured into the risky area of real estate financing through complex mortgage-backed securities which led to the global financial meltdown a decade later. 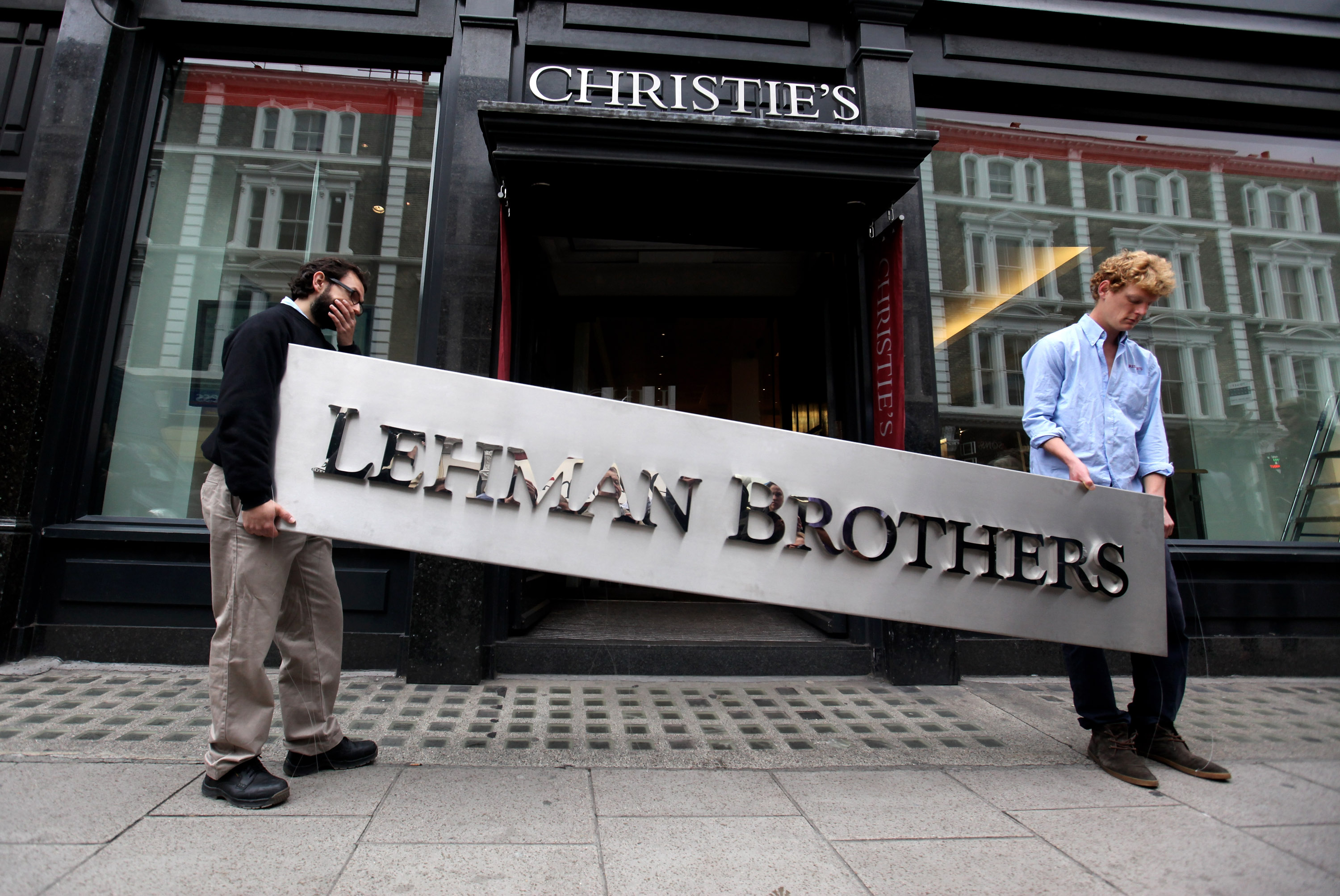 Two employees of Christie’s auction house manoeuvre the Lehman Brothers corporate logo, which is estimated to sell for 3000 GBP and is featured in the sale of art owned by the collapsed investment bank Lehman Brothers on September 24, 2010 in London, England. The “Lehman Brothers: Artwork and Ephemera” sale will take place on September 29, 2010, on the second anniversary of the firm’s bankruptcy, and comprises of artworks which hung on the walls of Lehman Brothers’ offices in Europe. * Photo by Oli Scarff/Getty Images

In 2003 and 2004 Lehman acquired five mortgage lenders, including sub-prime lender BNC Mortgage and Aurora Loan Services. In 2007, Lehman underwrote more mortgage-backed securities than any other firm, accumulating a US$85b portfolio. The extremely high leveraging was dangerous and the housing market began to wobble but Lehman executives carried on regardless. They even doctored statements to make things look rosier than the reality. By September 2008 all attempts to rescue the bank failed. Lehman went under. Consequently, markets around the world plunged.

During the whole global financial crisis — or “great recession” — shares fell by at least 50 percent for most markets. Others fell by as much as 60-70.

SWIFT MEASURES TO STEM THE LOSSES

Central banks moved swiftly to prevent a total disaster by QE (printing money) and lowering interest rates as we shall see later.

The collapse of Lehman Brother was the final result of a crisis that started in the American property market and the so-called toxic mortgages that triggered a stock-market crash and the greatest recession since the 1930s. The reckless lending of bankers in the years before the crash created a bubble that eventually imploded.  We still have not fully recovered from the impact. 25000 employees lost their jobs at Lehman alone. The S&P lost 50% of its value and also the Dow Jones lost similar percentages.

According to the London Sunday Times, the world’s five leading central banks (Bank of England, the US Federal Reserve, ECB-European Central Bank, Bank of Japan and Swiss National Bank have seen their combined reserves balloon to more than $15 trillion over the past decade, from about 4 trillion before the crisis in 2008.

Big banks have been instructed by regulators to hold ten times more capital than before the crisis.

Soon after Lehman Brothers filed for bankruptcy on 15 September 2008, the British government announced a £500bn bank rescue package ($7bn) on 8th October 2008. The government pumped £37bn into Royal Bank of Scotland, Lloyds, TSB, and HBOs. Bank of England cuts interest rates to 0.5% in the spring of 2009. Less than a week later the US Federal Reserve launched a rescue package to save American banks. Then followed programmes of QE Quantitative Easing i.e. pushing interest rates down by creating new money to make borrowing cheaper.

In April 2009 the government announces QE with an initial £75bn and in 2011 Bank of England increased the Quantitative Easing to £275bn and by 2017 interest rates falls to 0.25%. A recent Bloomberg report said: “Central banks bought about $10 trillion of bonds to help asset prices, a practice that’s now well known as quantitative easing, or QE. The asset purchases and sub-zero policy rates helped push yields on many sovereign bonds into negative territory as well. That means lenders pay governments to hold their debt, instead of demanding interest”.

Therefore, the immediate economic consequences of the crash were the bailout of the banks. Introduction of austerity measures and the contraction of credit which led to slow economic growth and declining tax revenues. Banks were forced to separate their high street lending to ordinary consumers from corporate lending operations also to separate their complex investments transactions from the normal banking operations. 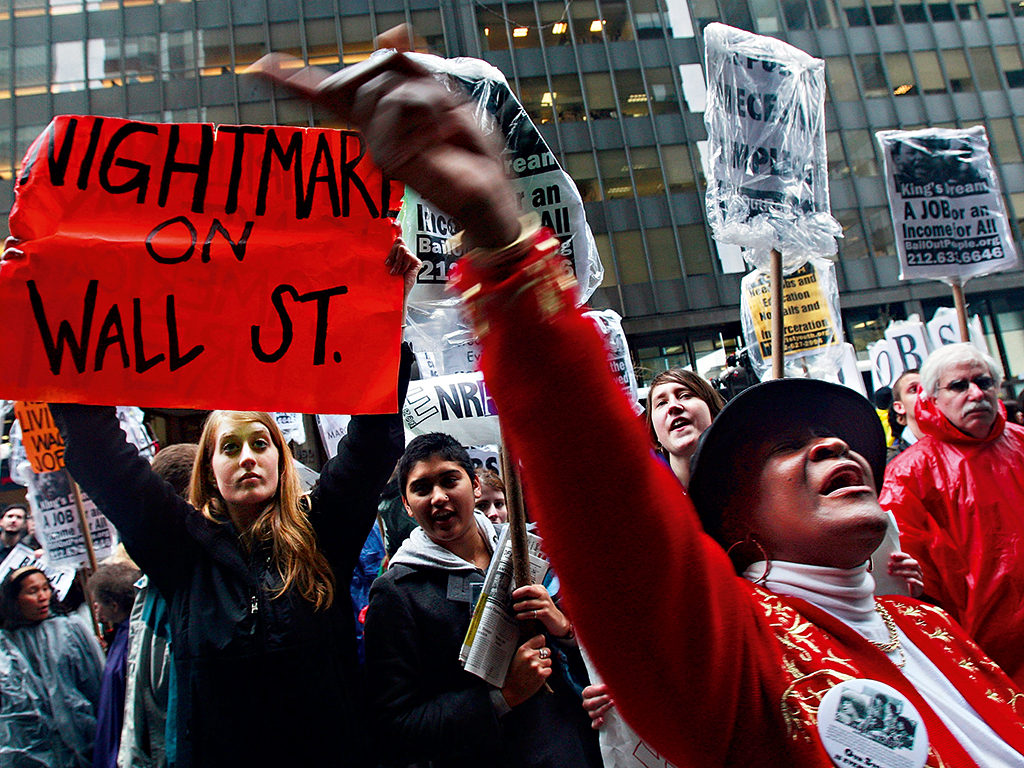 The cost of failure: In the case of the UK where reliable data is available. Since the crisis flared the country has lost £2.4 trillion in production and services which equates to £88,000 per household is an estimate of how much LESS the nation has produced over the past ten years due to the slowdown of growth since 2008 according to the London Times.

Add to that the cost to the taxpayers which includes the bailout of banks, less tax revenue, and increased welfare spending. The government debt ballooned from £665 billion in September 2009 to £1.78 trillion today an increase of £40,000 per household.

The biggest cash cost was the bailing out of Royal Bank of Scotland which cost the tax-payer £45 billion.

According to US media reports; millions of Americans lost their homes and became renters again, some of the debt was written down to match the collateral, whose value had crumbled. U.S. consumers have been paying off their debt, too. Helped by those factors and lower interest rates, the percentage of household income used to make debt payments is now at a 40-year low.

ARE WE TO WITNESS ANOTHER FINANCIAL MELTDOWN?

Since 2008 following the Global Financial Crisis, there has been a flood of very strict regulatory reforms and restrictions imposed by central banks and financial regulatory authorities. There have been more robust supervision and regulations to protect investors. Such measures have enhanced the strength and resilience of the financial industry. But there are challenges such as the rise of cryptocurrencies, the adoption of protectionist trade policies and the geopolitical uncertainties around the world.

The shaky economies of Argentina, Turkey, South Africa, and Iran are a cause for concern. The index of the emerging economies MCI has lost more than 20% since early 2018. The media reported recently that the currencies of Argentina, Turkey, and Iran have all hit record lows and concerns are growing about a contagion effect spreading to other countries. South Africa’s economy has gone into recession.

The IMF Chief Christine Lagarde said recently “The bottom line is this: We have come a long way, but not far enough. The system is safer, but not safe enough,” Lagarde said in a blog post on the 10th anniversary of the failure of US banking giant Lehman Brothers, which ignited the crisis.