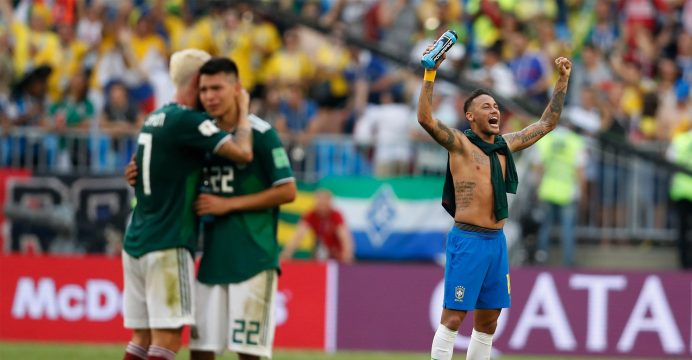 Neymar, Firmino on target as Brazil cruise over USA

Roberto Firmino and Neymar scored the goals as Brazil cruised to a 2-0 friendly victory over an inexperienced United States here Friday.

Brazil, playing their first international since a disappointing World Cup quarter-final exit, were in complete control throughout a low-key encounter at the MetLife Stadium in East Rutherford, New Jersey.

The South American giants had won their previous 10 games against the United States, whose lone victory came way back in 1998.

There was never much doubt that Brazil would extend their winning record to 11 consecutive wins as they dominated throughout against an American team who are rebuilding after their shock failure to qualify for the World Cup.

Brazil glided through a one-sided first half, with the hosts paying the price for repeatedly squandering possession cheaply. 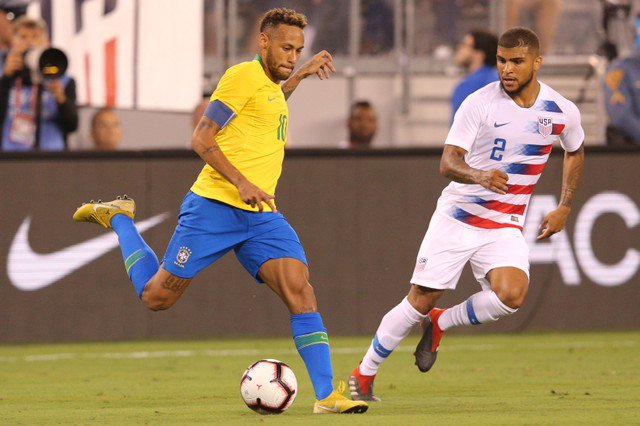 The opening goal came after 11 minutes, when Juventus winger Douglas Costa found himself in space on the right flank.

British-born left-back Antonee Robinson rushed in to close down Costa, but was left for dead as the Brazilian skipped past him all too easily before picking out Firmino with a pinpoint low cross.

The Liverpool forward tapped in an easy finish past Columbus Crew goalkeeper Zack Steffen for 1-0.

Costa had Robinson in trouble again after 31 minutes, going clear to whip in another low cross. This time however Neymar was unable to get on the end of it as the Americans cleared.

The South Americans doubled their lead three minutes from half-time when US captain Wil Trapp clipped Fabinho in the penalty area.

Paris Saint-Germain striker Neymar stepped up to stroke in his 58th international goal in his 91st game.

Neymar, who was handed the captain’s armband by manager Tite for this game, is now only five goals away from surpassing Ronaldo in second place on Brazil’s all-time scoring charts.

Ronaldo has 62 goals, while Pele tops the charts with 77.

Brazil’s sense of superiority was underscored by the fact that Brazil goalkeeper Alisson was not required to make a save until the 71st minute, turning around a low shot from Trapp.

US coach Dave Sarachan, who has spent nearly a year as the team’s caretaker boss following the exit of Bruce Arena after the World Cup debacle, admitted his team had paid the price for ceding possession too cheply.

“We played one of the best teams in the world,” Sarachan said.

“We were a little nervy. Probably should have done a little better with the ball, but that’s why you play these games.

“It wasn’t going to be an easy night when you play a team like Brazil.”