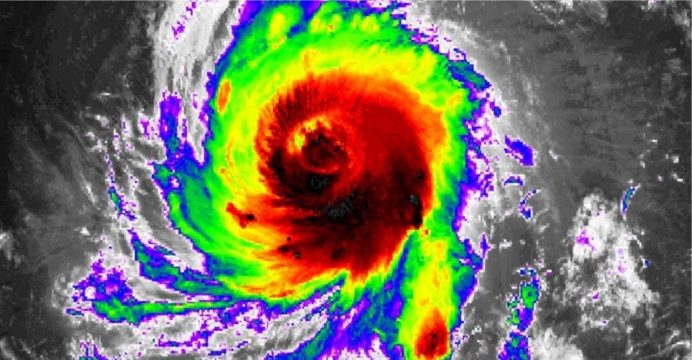 Japan to brace for a “very strong” Typhoon Jebi

Japan is bracing for a “very strong” typhoon, with authorities warning of high waves, floods and landslides, including in areas hit by deadly flooding earlier this year.

Typhoon Jebi, which at one stage was packing winds of up to 252kmph, has become the strongest tropical system so far this year, reports Aljazeera.

The storm is expected to make landfall on the country’s main island on Tuesday, according to Japan’s Meteorological Agency.

“Maintaining its very strong power, the typhoon is forecast to approach Honshu,” the agency said.

The path of the typhoon appeared to cover the western Chugoku region, where record rainfall in July unleashed flooding and landslides, killing around 220 people in Japan’s worst weather-related disaster in decades.

Local media said the typhoon, which is still hundreds of kilometres away from Japan in the Pacific Ocean, is likely to become the strongest storm to hit the nation this year, despite the fact that it is now weakening.

By the time the typhoon makes landfall, it’s sustained winds are forecast to be around winds are 170kmph with gusts nearer to 200kmph.

The meteorological agency urged residents in Kyushu and southern Honshu to prepare for high seas, landslides and floods.

The storm comes as around 27,000 people in Nagato in western Japan were ordered to evacuate their homes on Saturday due to torrential rain. Japan is now in typhoon season, and is regularly struck by major storm systems during the summer and autumn.

Jebi follows Typhoon Cimaron, which made landfall on August 23, disrupting transport links, but injuries and damages were limited. However, the ground remains saturated and many parts of Honshu remain flooded. It has been a summer of note for Japan, which has also been sweltering through a record and deadly heatwave.