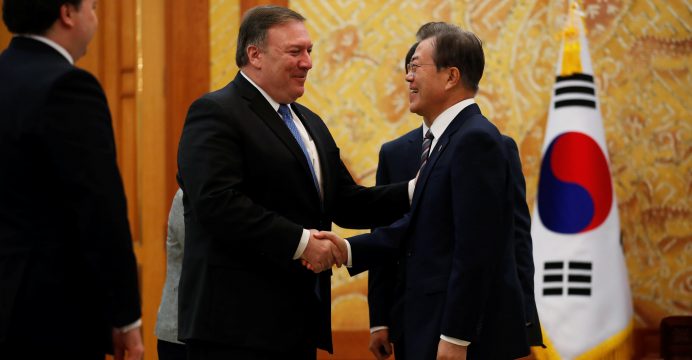 Tough sanctions will remain on North Korea until its complete denuclearization, the U.S. secretary of state said on Thursday, apparently contradicting the North’s view that the process agreed at this week’s summit would be phased and reciprocal.

U.S. President Donald Trump and North Korean leader Kim Jong Un issued a joint statement after their Singapore meeting that reaffirmed the North’s commitment to “work toward complete denuclearization of the Korean peninsula”, while Trump “committed to provide security guarantees”.

“President Trump has been incredibly clear about the sequencing of denuclearization and relief from the sanctions,” Secretary of State Mike Pompeo told reporters after meeting South Korea’s president and Japan’s foreign minister in Seoul.

“We are going to get complete denuclearization; only then will there be relief from the sanctions,” he said.

North Korean state media reported on Wednesday Kim and Trump had recognized the principle of “step-by-step and simultaneous action” to achieve peace and denuclearization on the Korean peninsula.

The summit statement provided no details on when North Korea would give up its nuclear weapons program or how the dismantling might be verified.

Skeptics of how much the meeting achieved pointed to the North Korean leadership’s long-held view that nuclear weapons are a bulwark against what it fears are U.S. plans to overthrow it and unite the Korean peninsula.

However, South Korean President Moon Jae-In said the world, through the summit, had escaped the threat of war, echoing Trump’s upbeat assessment of his meeting with Kim.

“What’s most important was that the people of the world, including those in the United States, Japan and Koreans, have all been able to escape the threat of war, nuclear weapons and missiles,” Moon told Pompeo.

Pompeo insisted North Korea was committed to giving up its nuclear arsenal but said it would “be a process, not an easy one”.

Kim understood getting rid of his nuclear arsenal needed to be done quickly and there would only be relief from stringent U.N. sanctions on North Korea after its “complete denuclearization”, Pompeo said.

Moon later said South Korea would be flexible when it comes to military pressure on North Korea if it is sincere about denuclearization.

Also on Thursday, North and South Korea held their first military talks in more than a decade. The talks followed on from an inter-Korean summit in April at which Moon and Kim agreed to defuse tension and cease “hostile acts”.

Speaking later in the day in Beijing, Pompeo thanked China for its efforts to ensure the Trump-Kim summit happened, but also struck a note of caution.

“I wanted to thank you for the kind words you had for President Trump and work he did to put us in this place where we now believe we have a path forward which can truly, for the first time in so many years, create peace on the peninsula,” Pompeo told the Chinese government’s top diplomat, State Councillor Wang Yi.

“And there is still a lot of work to do. There are still risks that we won’t achieve that.”

Wang said the meeting brought the Korean peninsula nuclear issue back to the correct track of resolving it peacefully.

“It accords with the all parties’ joint interests, including those of the United States and North Korea,” he said.