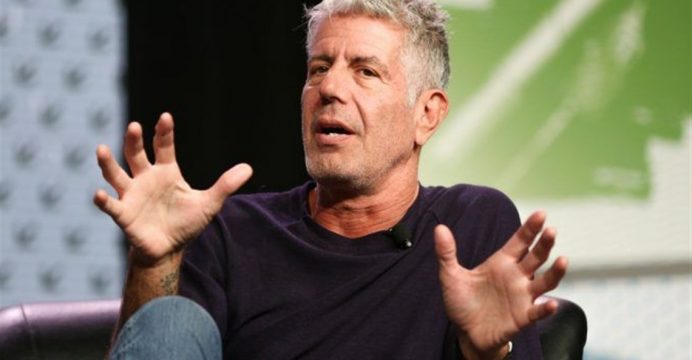 The outspoken chef was reportedly found unresponsive by close friend and French chef Eric Ripert. The network said he was working on an upcoming episode of his show “Anthony Bourdain: Parts Unknown.”

“It is with extraordinary sadness we can confirm the death of our friend and colleague, Anthony Bourdain,” CNN said in a statement. “His love of great adventure, new friends, fine food and drink and the remarkable stories of the world made him a unique storyteller. His talents never ceased to amaze us and we will miss him very much. Our thoughts and prayers are with his daughter and family at this incredibly difficult time.”

Bourdain has been an outspoken supporter of the #MeToo Movement since his girlfriend, Asia Argento, accused Harvey Weinstein of sexual assault in October.

“I am proud and honored to know you. You just did the hardest thing in the world,” Bourdain tweeted at Argento after Ronan Farrow’s scathing expose about Weinstein was published in the New Yorker.

In an in-depth interview with the Daily Beast in April, Bourdain admitted that he has been reluctant to speak out about the movement changing the entertainment industry, explaining that he didn’t want to steal the spotlight away from the women the movement is about.

“It’s something I’m very aware of when I hear myself talking about it—it makes me very uneasy,” he told the outlet. “These are not my stories, so I feel that every time I’m talking about it I’m taking up space that should be rightfully taken by a woman. It’s a fine line for me. I don’t particularly enjoy talking about it. But if you ask me, I’ll tell ya.”

“I deeply resented the relative stability at my house. I started taking drugs as soon as I encountered them,” the chef told The Guardian in 2013.

Bourdain dropped out of Vassar College after two years to pursue a career in the culinary world. He graduated from the Culinary Institute of America in 1978 and from there, went on to work in various restaurant kitchens including One Fifth Avenue and Sullivan’s.

His big break came when he was appointed when he was appointed executive chef at Brasserie Les Halles in 1998. A year later, Bourdain’s celebrity grew when the New Yorker published his now-famous “Don’t Eat Before Reading This,” an article which exposed the inner workings of restaurant kitchens.

Capitalizing on the interest in his expose, Bourdain released the non-fiction bestseller “Kitchen Confidential” in 2000 which made him a household name. His other books include the novels “Bone in the Throat” and “A Cook’s Tour.”

“I was 50 when I became a father of a little girl. I was finally old enough to be qualified for the job. Ariane has me wrapped around her finger,” Bourdain told The Guardian in 2013. “All I can realistically hope for is that she feels loved. That she has high self-esteem. And good martial-arts skills.”

Bourdain and Busia divorced in 2016 and the chef was most recently dating Italian actress Asia Argento.

He is survived by his daughter Ariane.