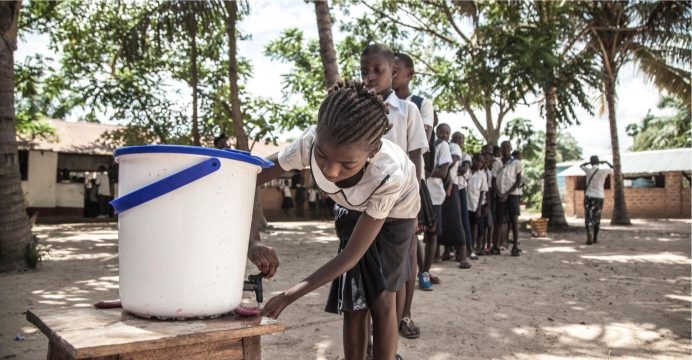 Since the start of the Ebola outbreak in the Democratic Republic of the Congo (DRC), UNICEF and its partners have reached more than 300,000 people with lifesaving information about how to avoid contracting the deadly virus, as part of an ongoing awareness-raising campaign targeting more than 800,000 people across the affected areas.

“Information and social mobilization are key to containing Ebola,” said Dr. Gianfranco Rotigliano, UNICEF Representative in the DRC, who also coordinated the UNICEF response to the Ebola outbreak in West Africa from 2014 to 2015.

“During the Ebola outbreak in West Africa, we learned that active involvement of local communities is essential in sharing information about how to stay safe, and that will ultimately help to stop the spread of the disease.”

Children are deeply affected by the Ebola outbreak. One out of every ten people infected with the virus or suspected to be infected are children, while hundreds of children and their family members have been in contact with infected people and are now in need of psychosocial assistance.

In containing the spread of the disease, UNICEF and its partners have worked with more than 2,500 teachers and 53,000 pupils to raise awareness on prevention and protection measures, while 30 young reporters in the affected areas have been trained and are now themselves informing their peers on the importance of good hygiene as a way to avoid the spreading the disease.

Community outreach is also an important part of the Ebola vaccination campaign. In fighting the Ebola outbreak, the Government and its partners have now vaccinated more than 1,100 health workers and others who have been in contact with infected people in the three affected health zones of Wangata in the city of Mbandaka, Bikoro and Iboko.

While community outreach continues, UNICEF and its partners are also promoting hygiene in schools, health facilities and in communities. 49 public sites, including ports, market and offices, were equipped with handwashing units and laser thermometers. UNICEF has also supported the training of 181 psycho-social assistants to provide support to affected families.

UNICEF has so far deployed 45 staff in the affected regions to assist with the response to the Ebola outbreak. UNICEF has appealed for $11.5 million USD in support of its Ebola response plan, of which $8 million has been funded.